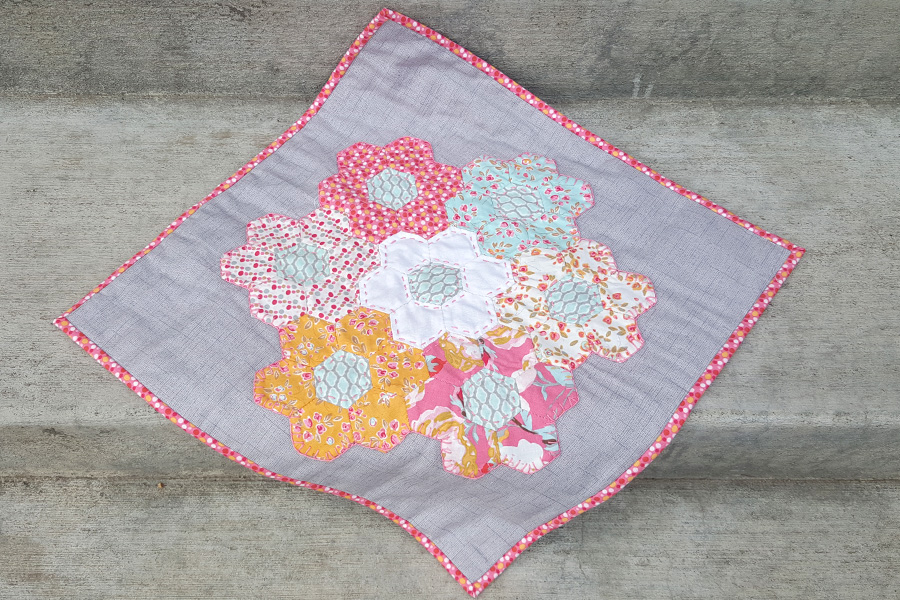 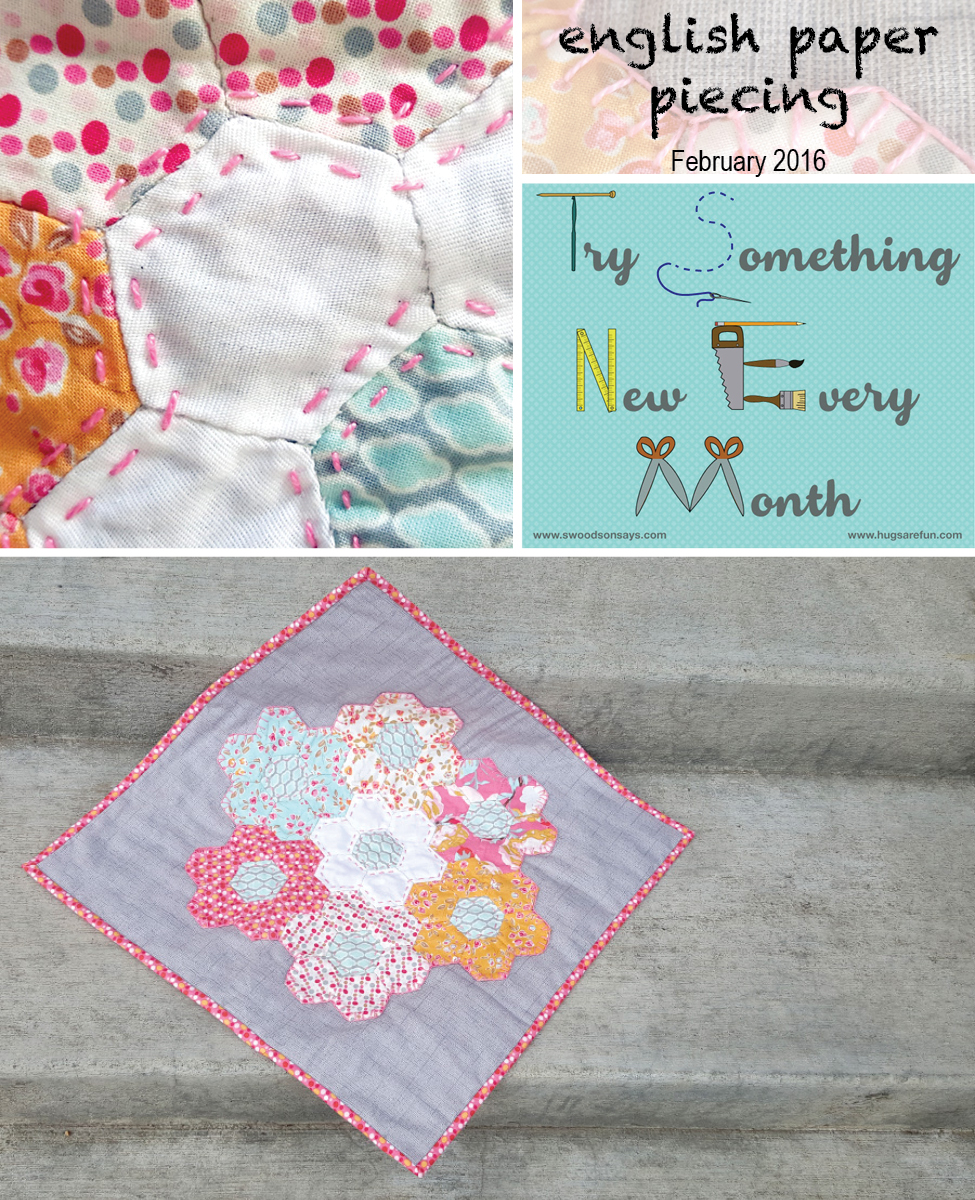 I ran across Stephanie’s and Rebecca’s co-hosted project, Try Something New Every Month (TSNEM) for 2016, last month, and I decided to participate because there are a lot of sewing techniques I have never tried and would like to.  You can read my original post talking about the project HERE, and the post that lists what projects I’m going to try each month HERE.

Last  month my TSNEM project was hand embroidery, and while I didn’t hate it, it is not something I am going to take up as an active hobby – maybe a small project here and there.  Continuing along the hand-sewing vein, this month I decided to try English Paper Piecing, which is the creation of a quilt block or entire quilt using fabric wrapped around paper patterns.  There is a great article about it English Paper Piecing on Craftsy.

I have quite a few small scraps left over from making the Chatsworth Quilt Top, so I decided to use them to make my paper pieced hexagons, and I followed a great English Paper Piecing Tutorial on The Zen of Making.  It is a two-part tutorial that covers the process in two parts – making the individual pieces and then sewing them together. 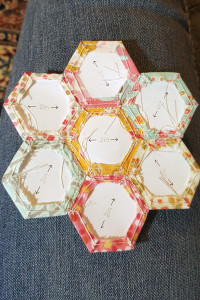 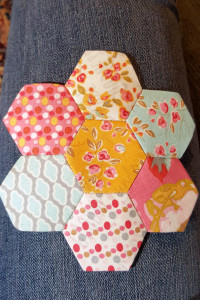 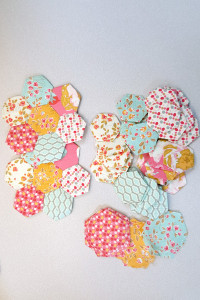 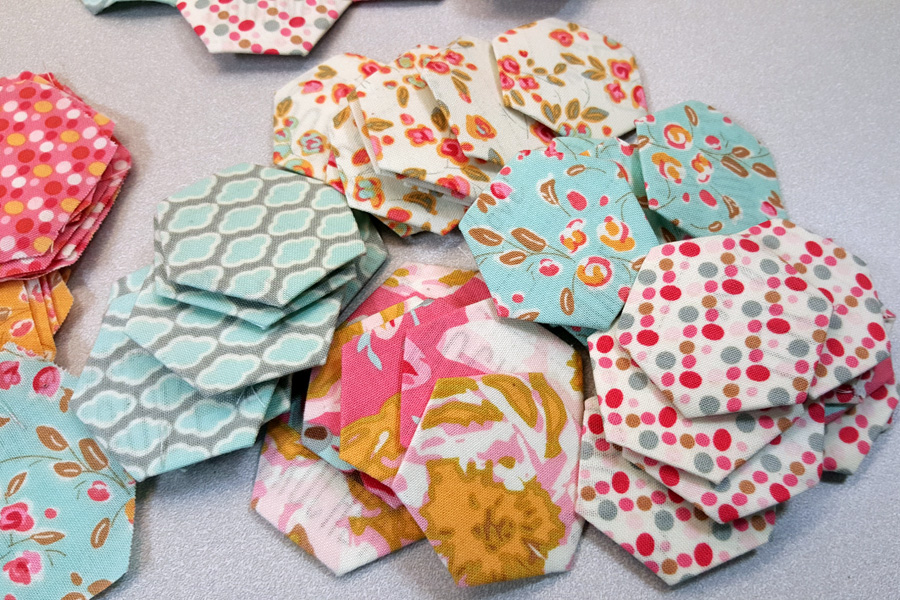 The only part of this project I really struggled with was deciding what to do with all the hexagons once I had them made (I made 80 total).  I debated about a pillow, bag, and multiple other items, but I just couldn’t decide.  I also originally assembled the first two flowers using one of each fabric-type. 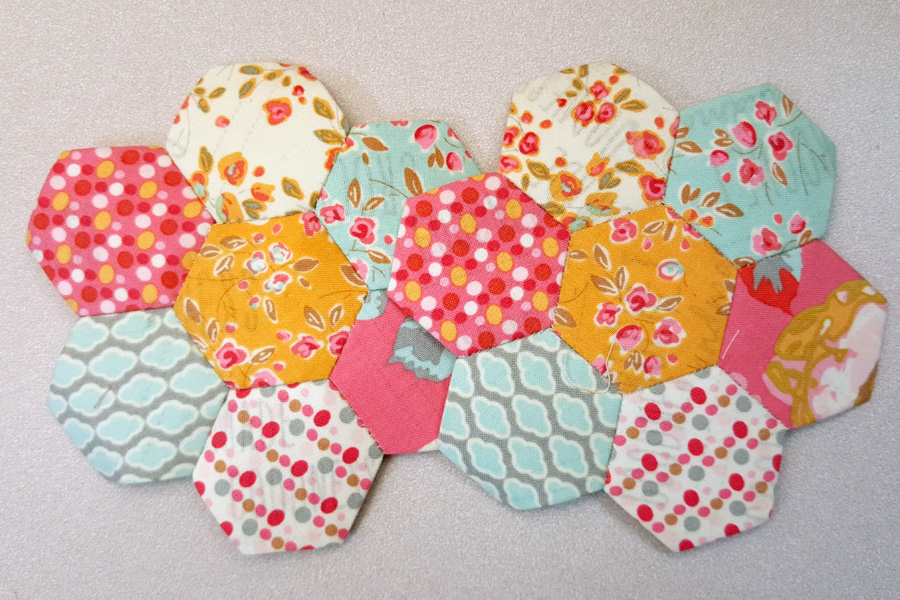 Eventually, though, I settled on making the flowers each with the same center hexagon surrounded by petals of the same fabric, and the center flower in the pattern would contain one of each of the fabrics. 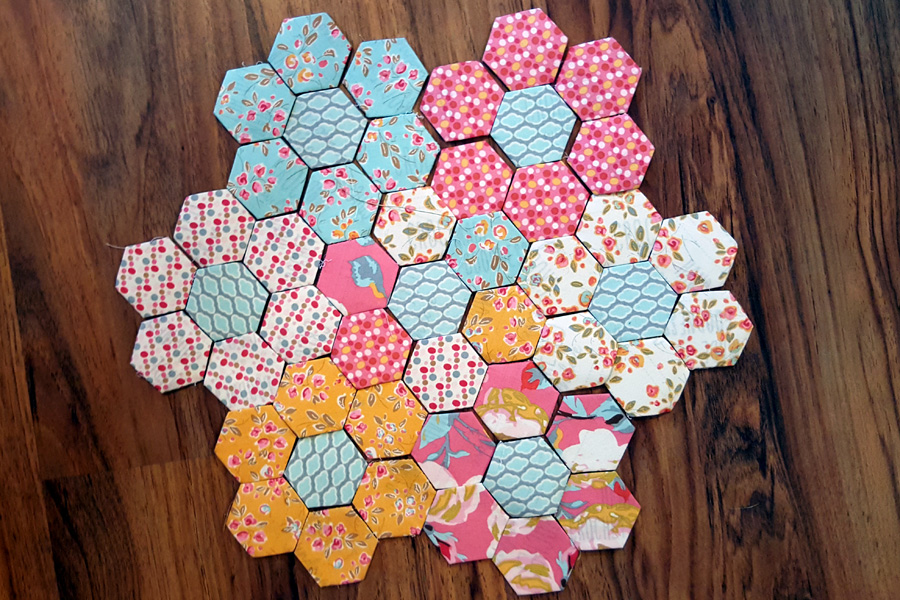 I changed my mind, again, however, and I settled on making the center flower out of white hexagons surrounded by the other flowers. 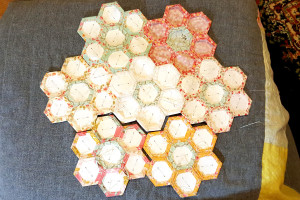 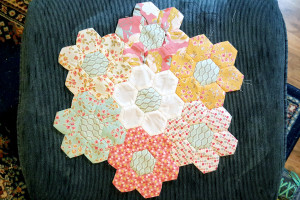 I also decided to appliqué the finished flower pattern onto some gray shot cotton I have in my stash and make a little mini quilt for my daughter’s dog (Pip the Chihuahua).  One plus of that decision is that I had to teach myself the blanket stitch so I could finish the appliqué. 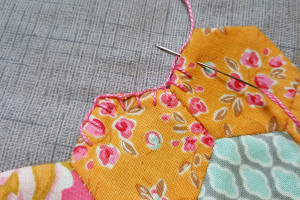 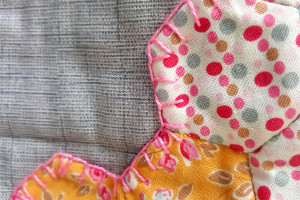 Once I had the appliqué finished, I added the backing fabric (the same as the centers of the flowers), and stitched in a pattern that followed the center flower out. 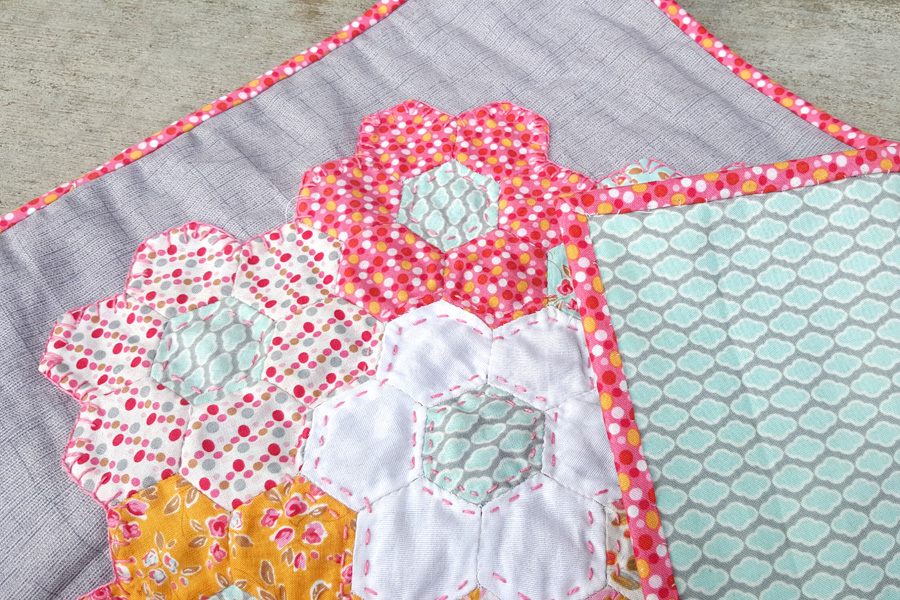 The stitching on the front of the quilt doesn’t look too bad, and I’m pretty happy with it, especially since I have never hand quilted before. 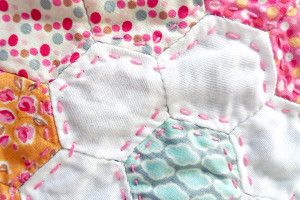 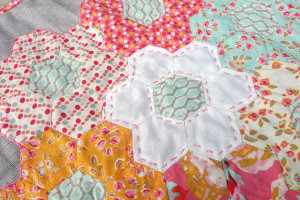 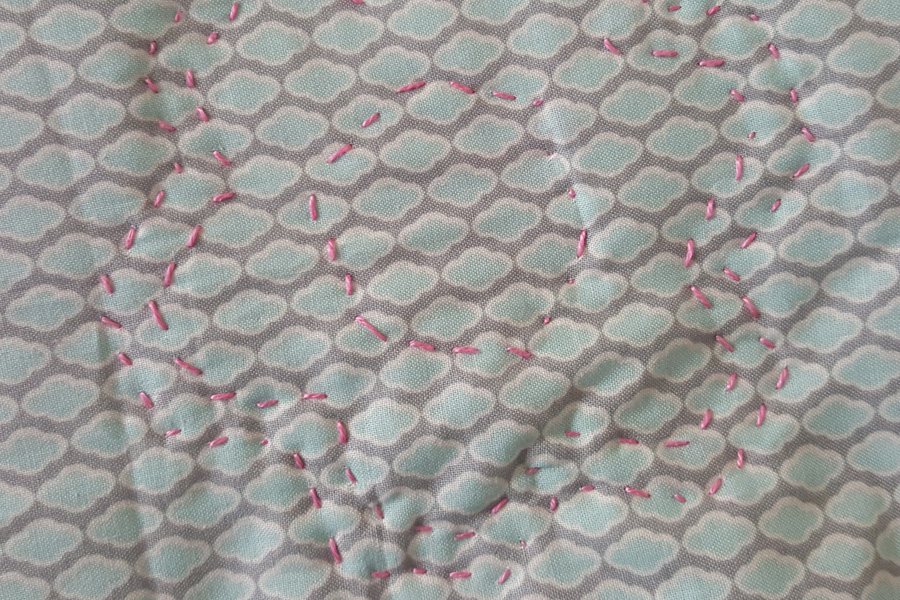 Once I had the hand-quilting done, I added the binding.  I did machine sew the first side of the binding on, and then I used my Clover Wonder-Clips to hold it in place while I hand stitched the binding.  It was the first time I used the clips, and I LOVE THEM!  They are so easy to use, and I have zero pricked fingers!!!  I spent a basketball game and a half working on the binding and I was able to finish it.  It was also the first time I used the blind stitch, and I can see a couple places where I pulled the thread too far out into the fabric, but I’m happy with the final result. 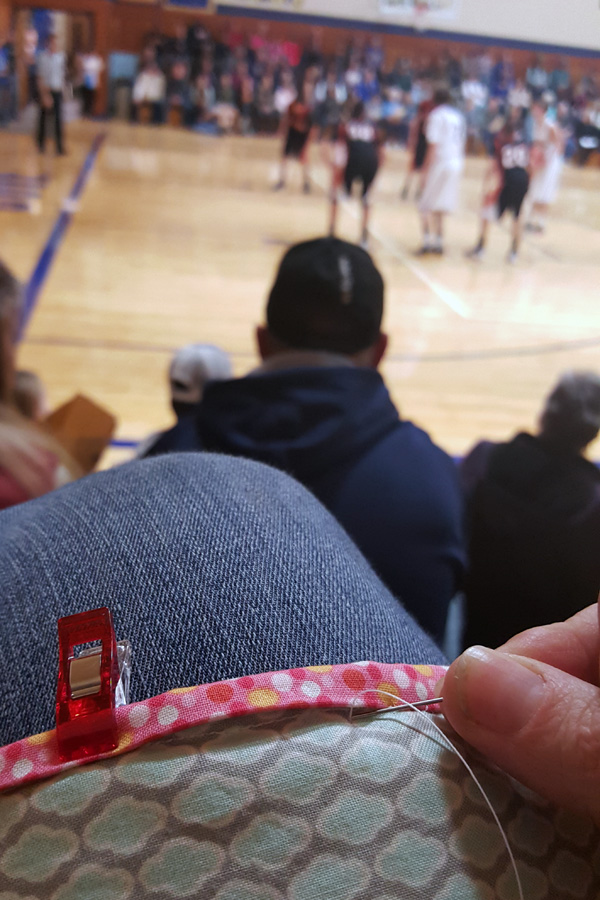 All in all, I’m really happy I finished this project (on time, too!), and I actually didn’t hate all the hand sewing.  I worked on it a lot during My Fair Lady rehearsals, and it was really nice to have something to keep me busy when I wasn’t on stage.  I actually liked this project enough that I would not be surprised to be working on more English Paper Piecing projects in the future. 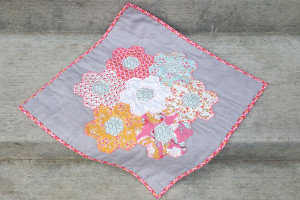 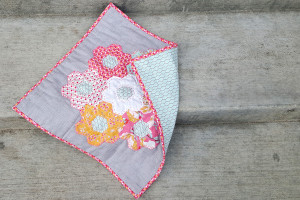 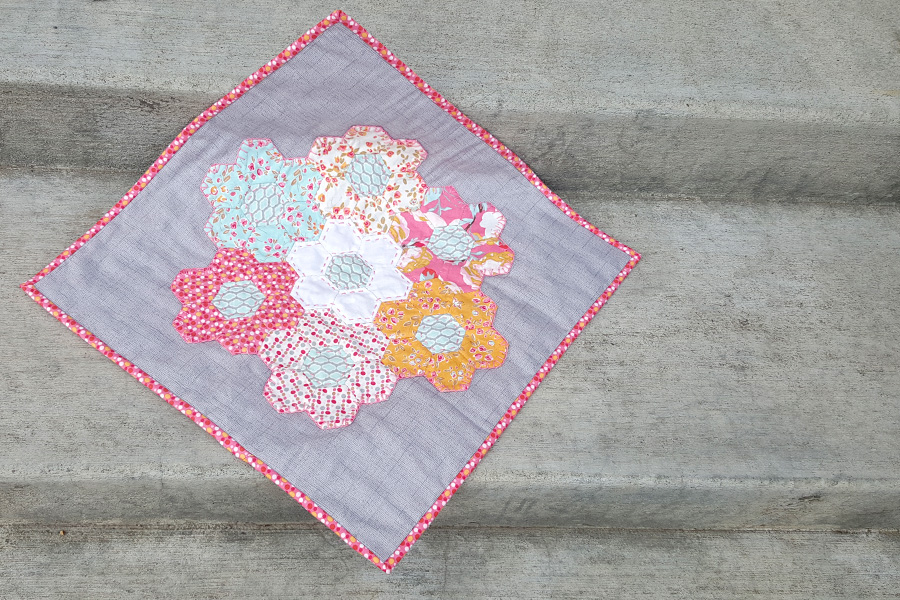