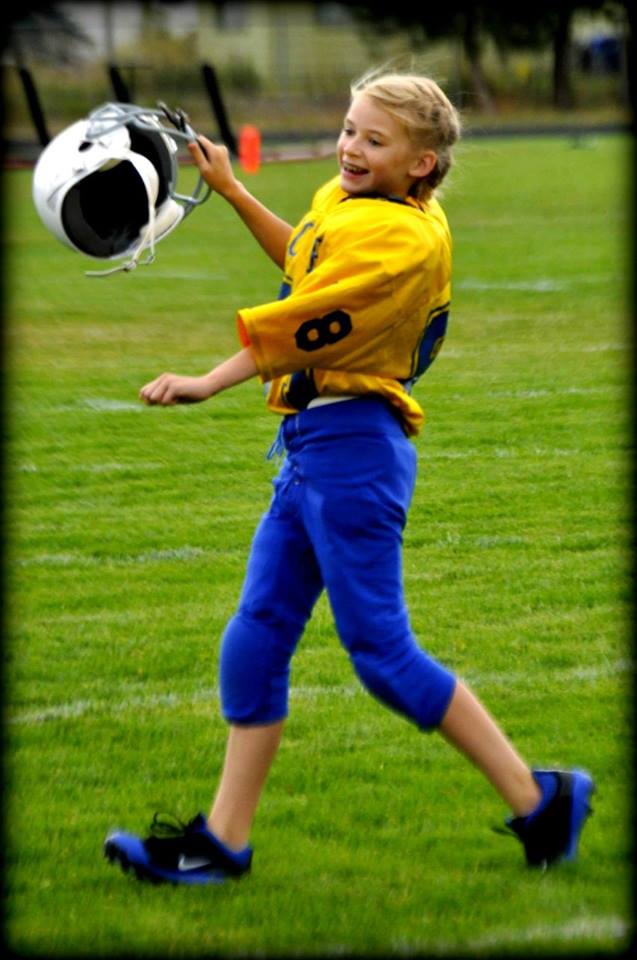 That is a moniker I never thought I would have – Football Mom. Volleyball, track, basketball, yes, but football?  I never in a million years expected it.  Not because I’m against football, actually, I love it, but because I have three daughters.  My oldest is done with high school and is heading off to college in a week – she played volleyball, basketball, and ran track.  My middle daughter, the Freshman, plays volleyball, basketball, and is going to play golf this year.  My youngest . . . well, she’s always been different from her sisters; in personality, temperament, thinking, and sports.

Reagan loves snowboarding.  It is the first sport she has played where she is completely in her element.  She lights up when she talks about it, gets excited to go every weekend, and lives for time on the mountain in the snow.  It is the same with football.  She loves it!

Reagan asked to play football two years ago when we first moved to Cove, and I told her no.  After suffering a knee injury (torn lateral collateral ligament) and spending six weeks in a brace on crutches, I felt justified in my rejection of her request.  The second year we were here, she attended every Junior High football practice she could make it to, and she went to as many home games as she could – all on her own.  She was the honorary ball/water girl, and even earned the nickname “Spike”.  After witnessing her voluntary dedication to a team and a sport she loves, I could’t say no to her again this year.

Last weekend she was able to play in her first game, and after I heard the excitement in her voice telling me about the game and how much fun she had, I knew I made the right decision.  I have to remind myself constantly that Reagan is not like her sisters in any way, and she will always keep me on my toes as a parent.

Getting a little advice from the high school coach, Mr. Hubbard. I am so proud of her and her absolutely fearless personality.  I love that she is the type of person who enjoys going against the flow, is not a “normal” girl, and who is confident being her own person.