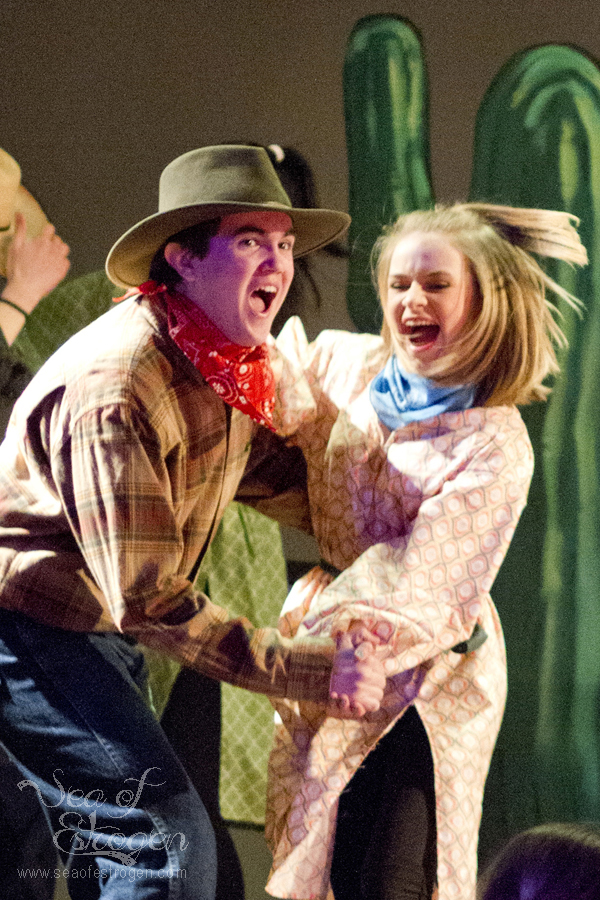 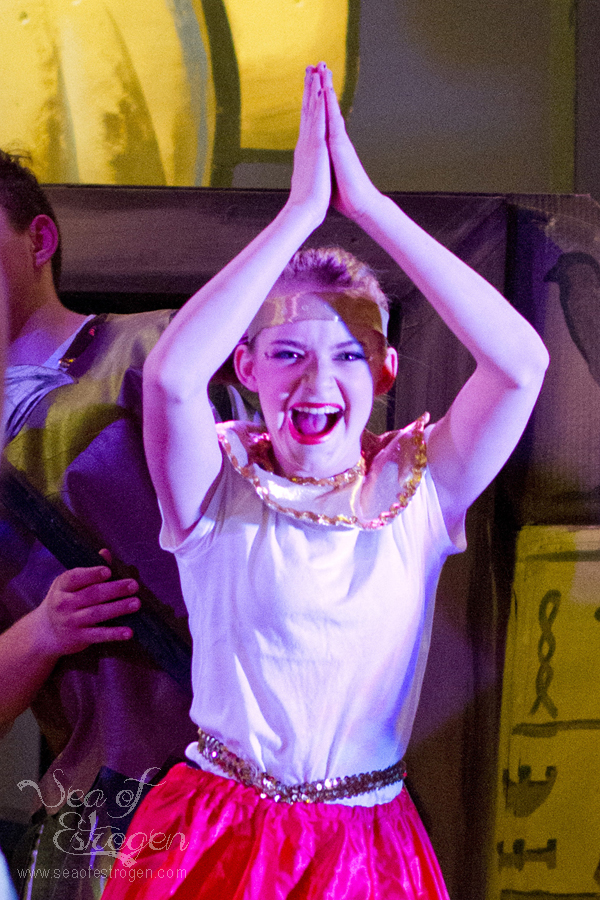 Joseph and the Amazing Technicolor Dreamcoat is a musical production created by Andrew Lloyd Weber and Tim Rice. Told through the song of a narrator, it is based on the Biblical story of Joseph, found in the Book of Genesis. In the case of this production, the Opera House used two narrators, and it was amazing!  I am familiar with the story of Joseph and his coat of many colors from the Bible, but I never saw the musical interpretation of it.  I am impressed with how hard Reagan worked to get ready for this show, and how comfortable she is on stage.  She will always be my star! 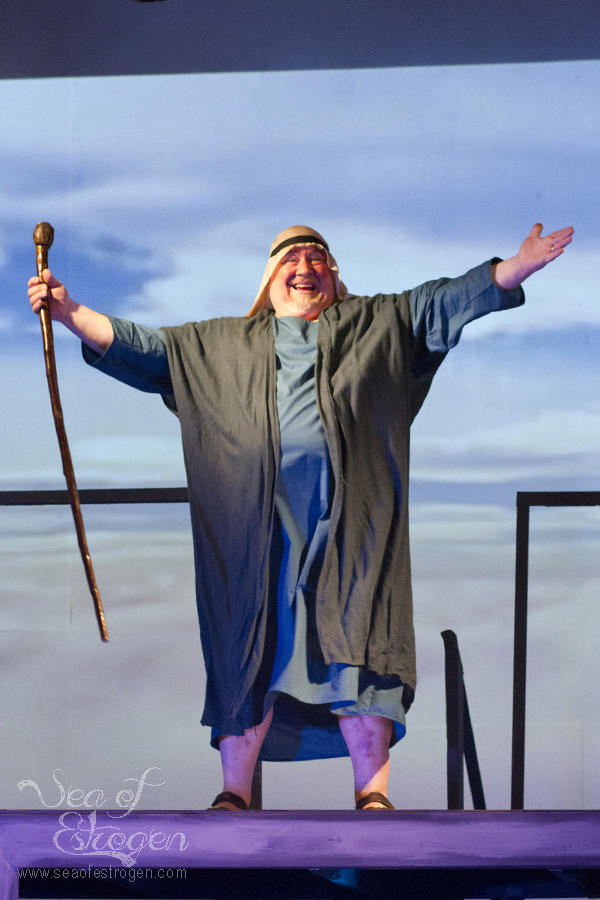 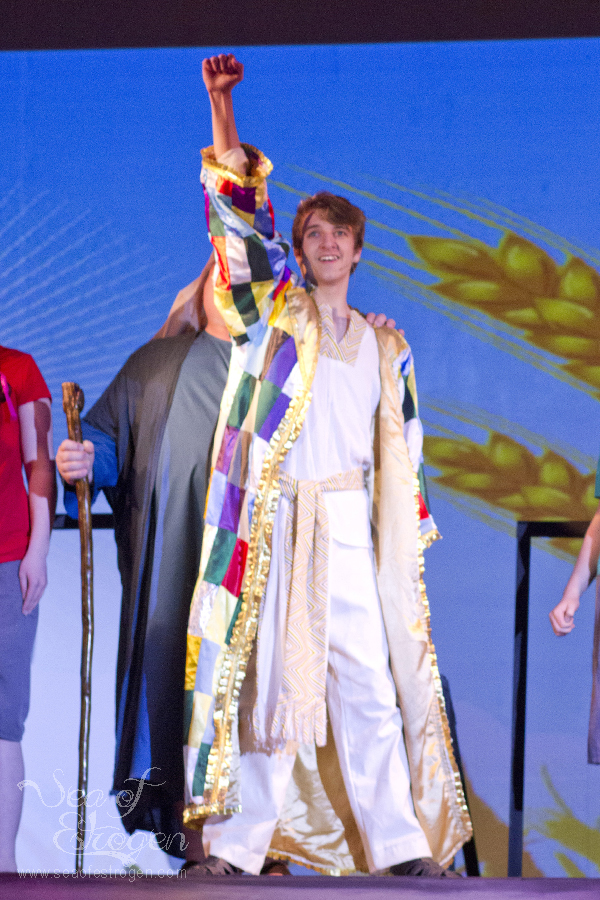 The story begins with the introduction of Jacob and his 12 sons, including his favorite, Joseph. Joseph’s brothers are jealous of him for his coat of may colors, which is a symbol of their father’s favoritism. It is clear from Joseph’s dreams that he is destined to rule over his brothers. The brothers attempt fratricide, but instead sell Joseph as a slave to some Ishmaelites who take him to Egypt. The brothers, led by Reuben, and their wives, break the news to Jacob that Joseph is dead, showing Jacob his torn coat smeared with “his” blood (really goat’s blood) as proof. 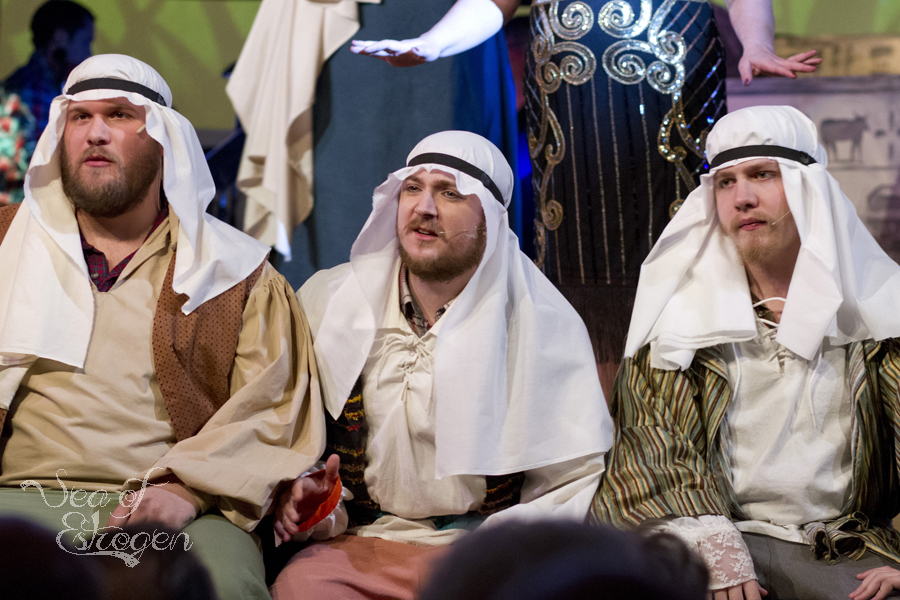 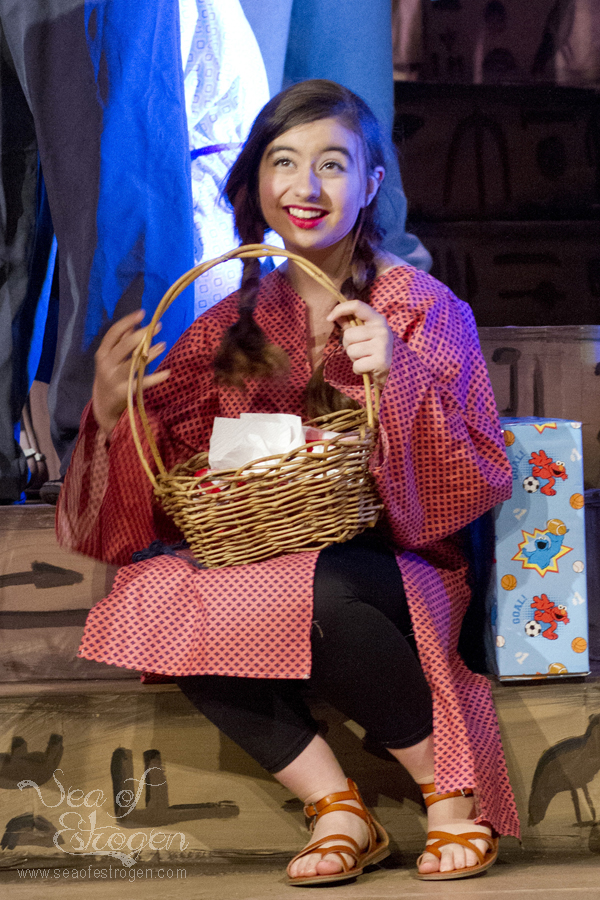 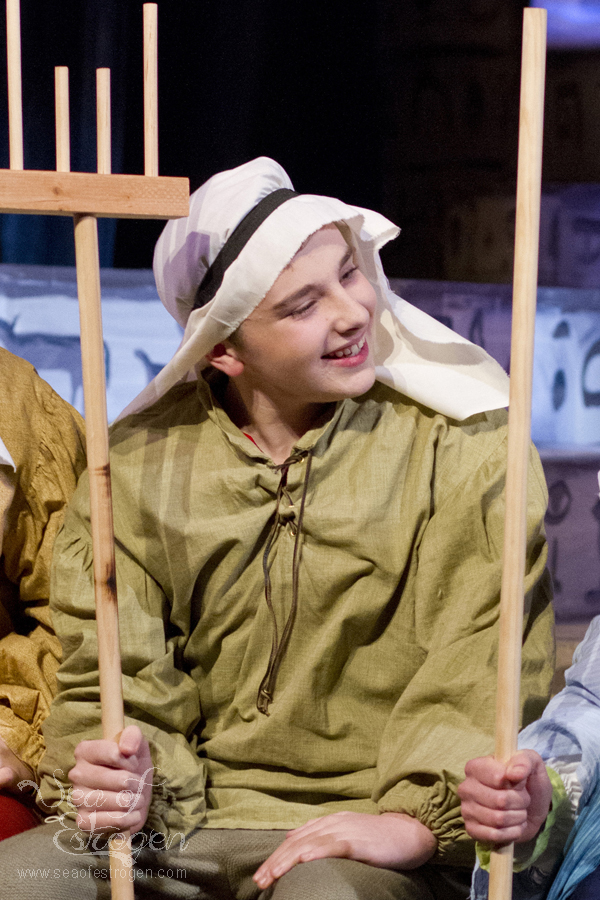 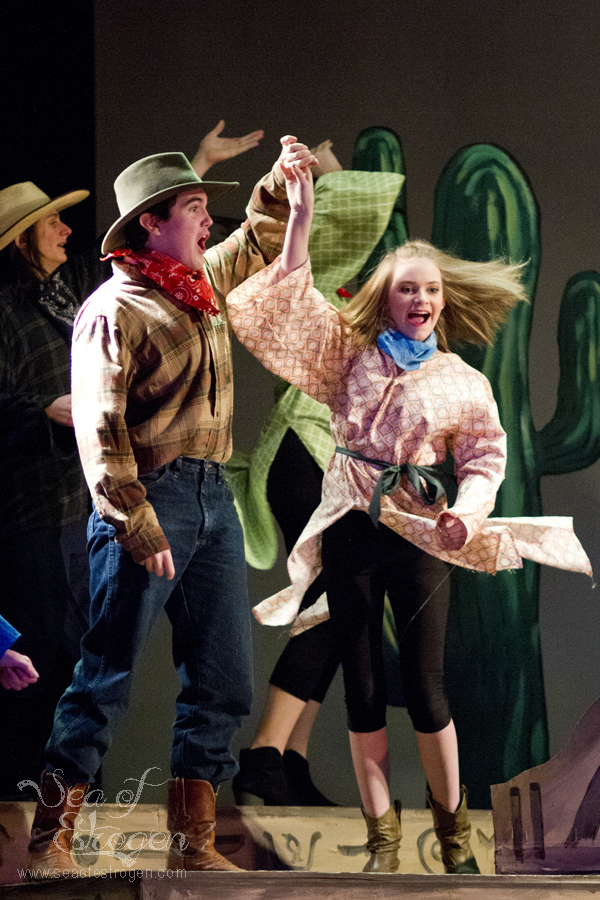 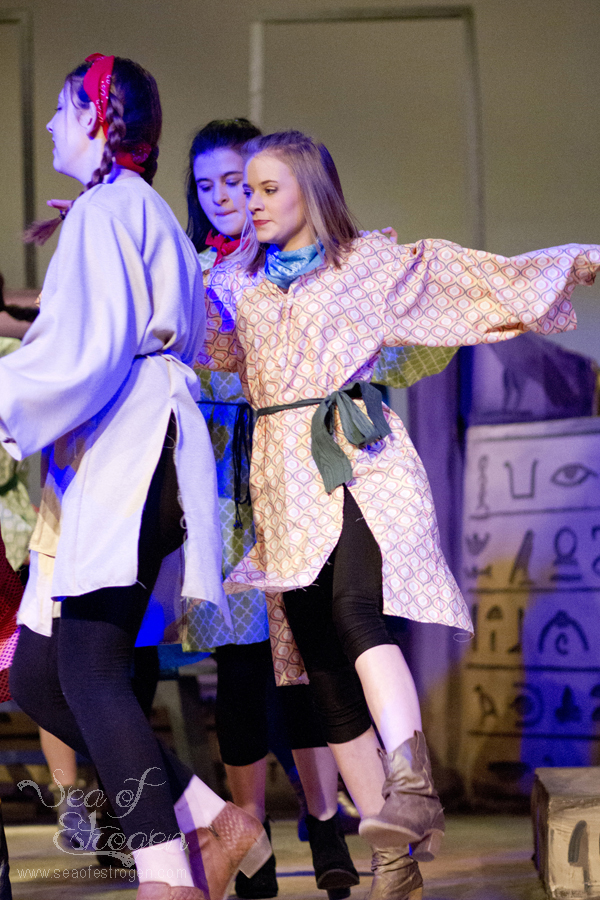 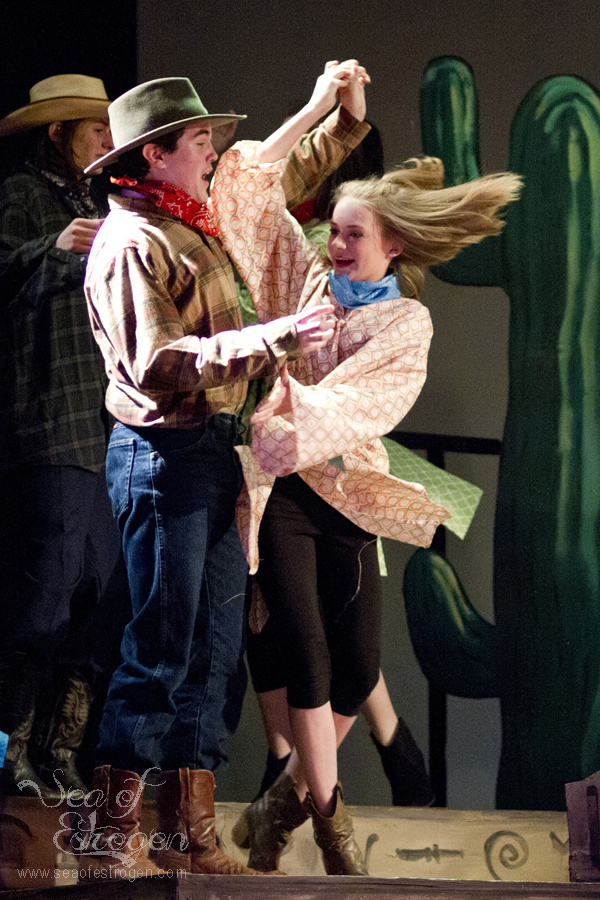 Sold as a Slave

Once in Egypt, Joseph becomes the slave of the Egyptian millionaire, Potiphar. He excels and rises through the ranks of slaves and servants to run Potiphar’s house. Joseph spurns advances made by Mrs. Potiphar, but she continues to press him. Potiphar barges in, and upon seeing the two together, jumps to conclusions, throwing Joseph in jail. While in jail, Joseph correctly interprets the dreams of two fellow prisoners, one of which is the Butler to Pharaoh. 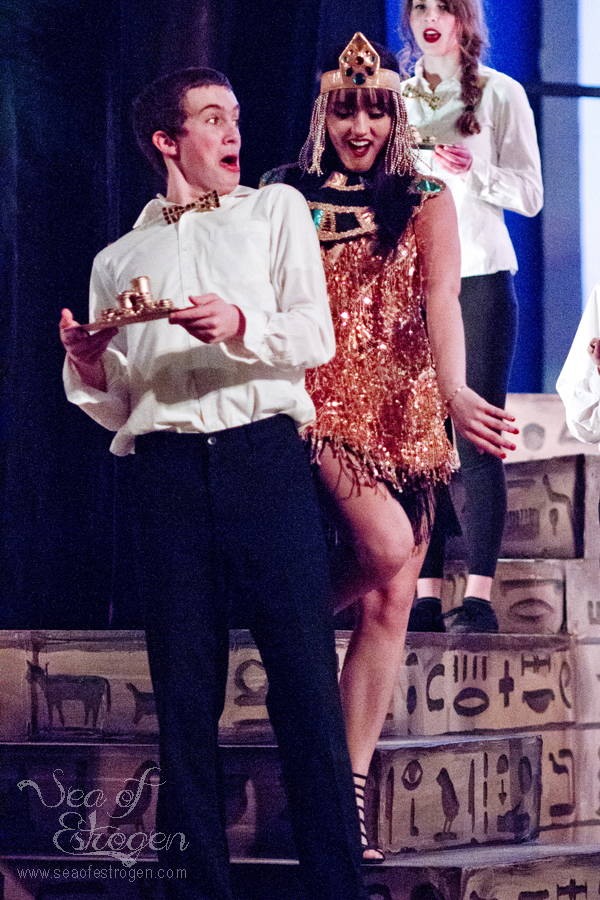 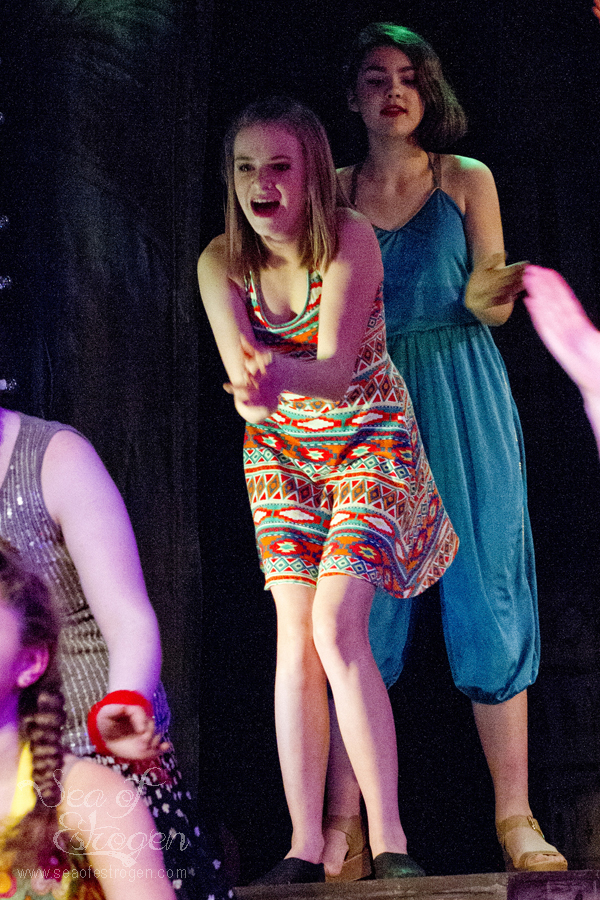 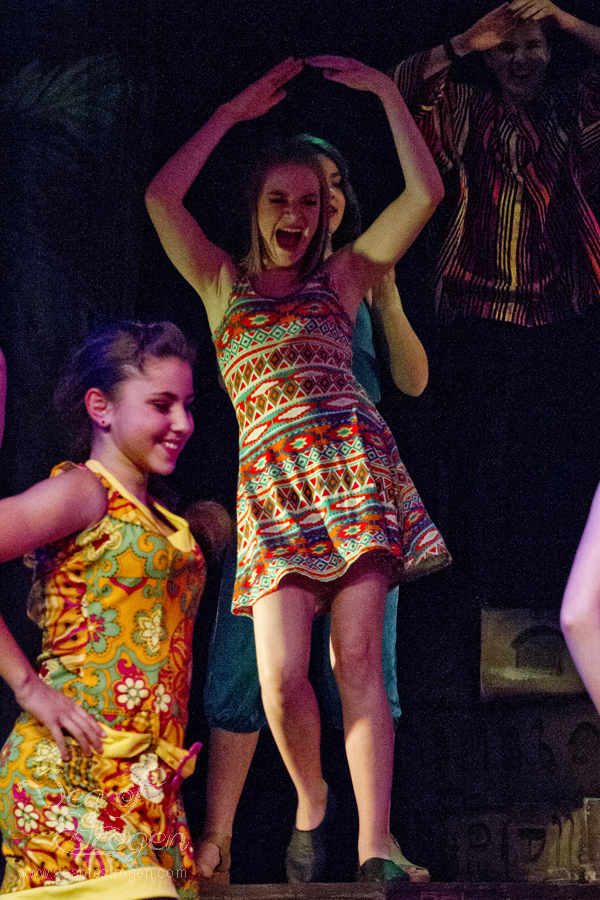 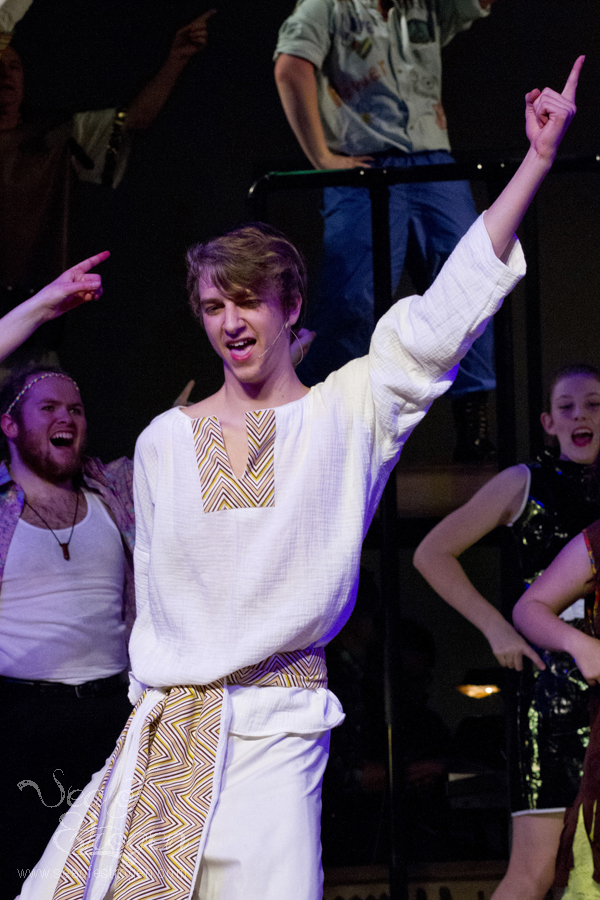 Pharaoh orders Joseph to be brought to him after the Butler told Pharaoh about Joseph and his dream-interpretation skills.  After interpreting Pharaoh’s dreams as seven years of plenty followed by seven years of famine, Joseph is put in charge of the preparations needed to endure the coming famine. The Pharaoh promotes Joseph to the most powerful man in Egypt, second only to himself. 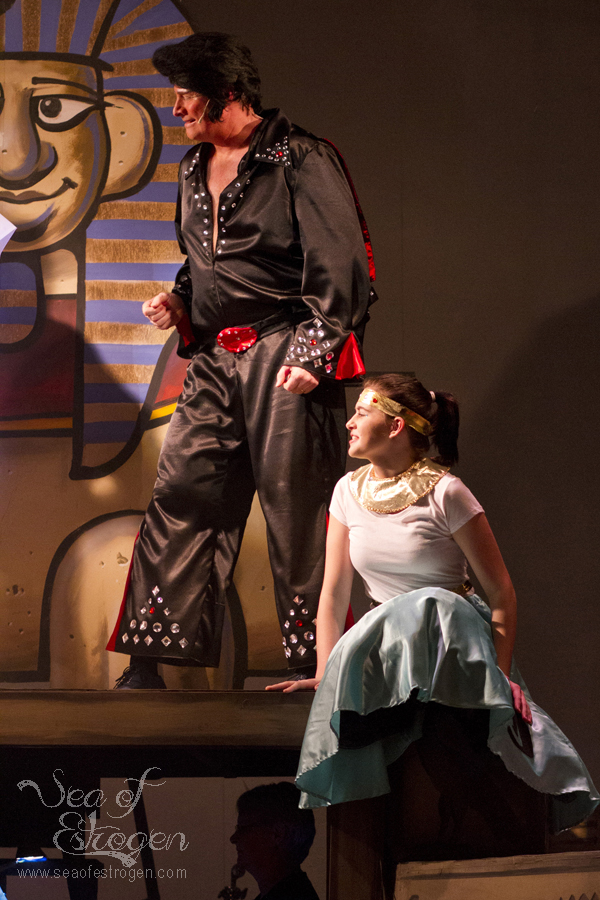 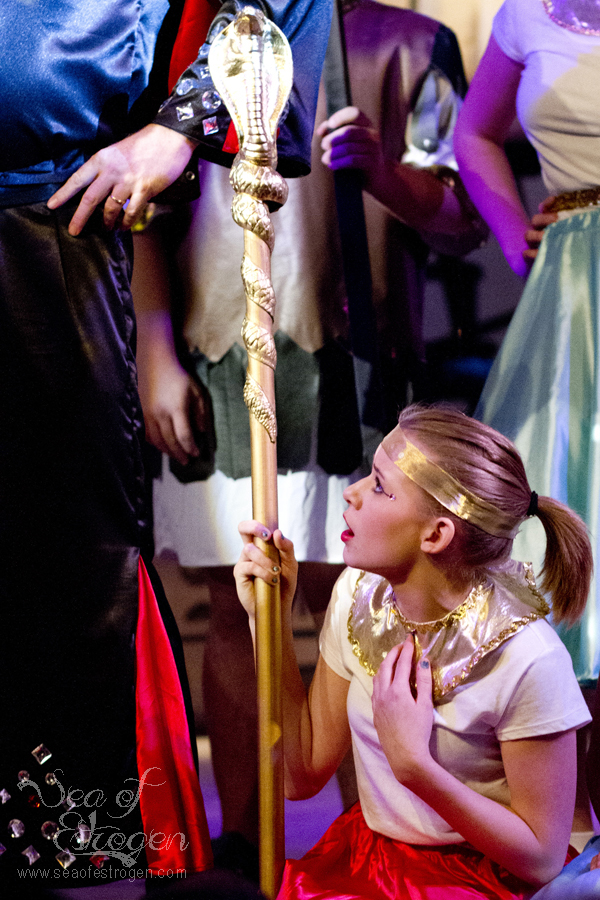 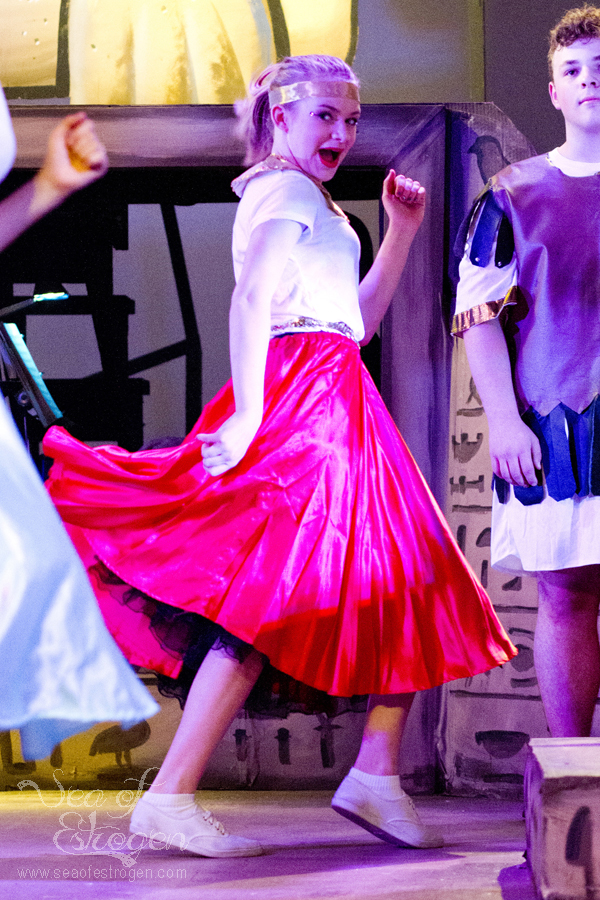 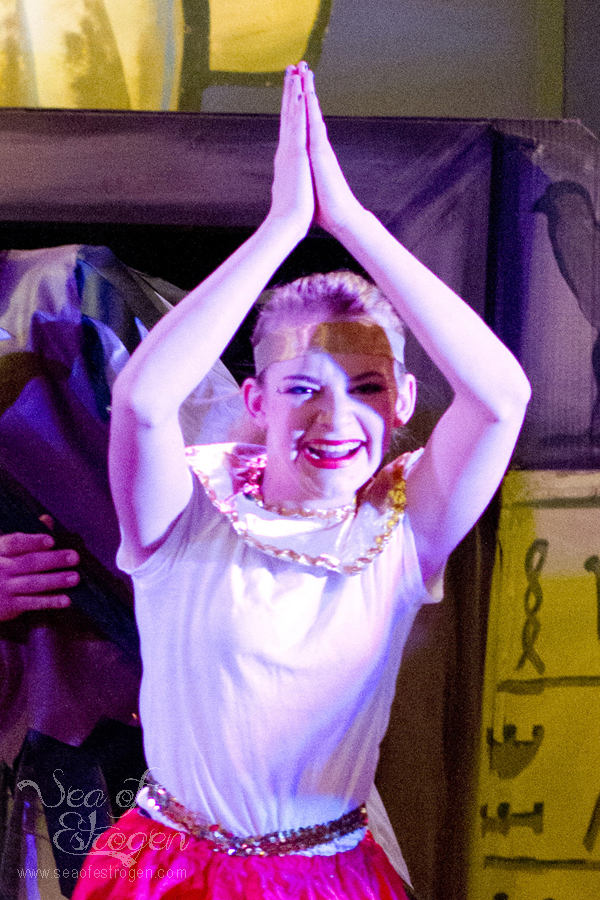 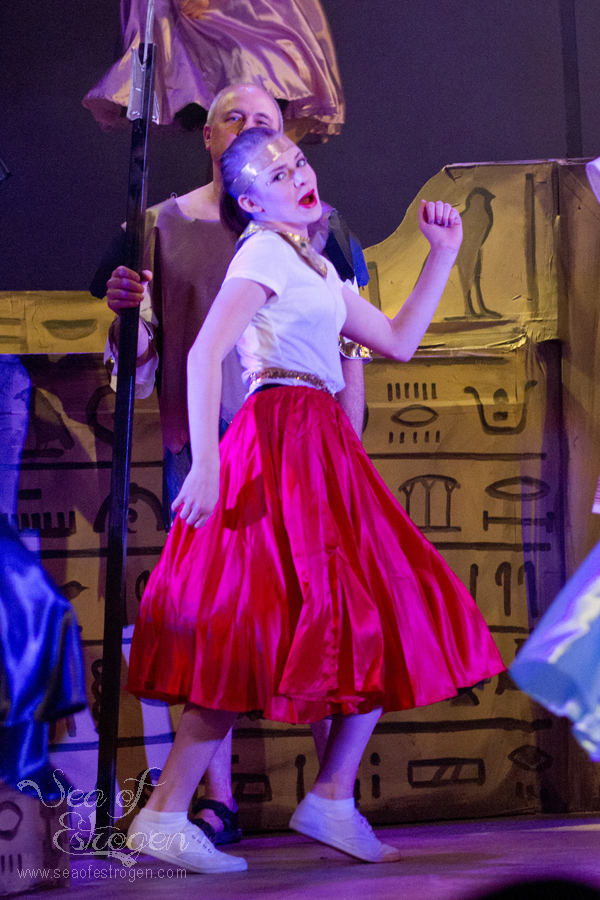 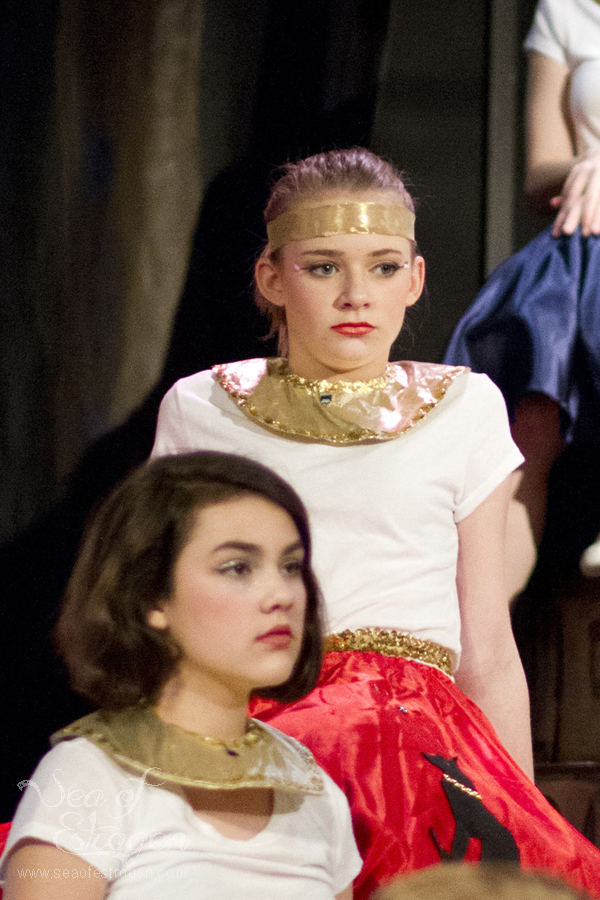 Unfortunately, for Joseph’s brothers, they did not prepare for the famine, and starvation catches up with them. Upon hearing that Egypt still has food, they decided to travel there, beg for mercy, and to be fed. The brothers don’t realize they are begging for food from Joseph, who gives them sacks of food. Joseph plants a golden cup in the food sack of his youngest brother, Benjamin, and when they try to leave, Joseph stops them, asking about the “stolen cup”. Each brother empties his sack, and Benjamin is revealed to have the cup. Joseph accuses Benjamin of robbery, and the other brothers beg for mercy for Benjamin asking Joseph to take them prisoner and set Benjamin free. 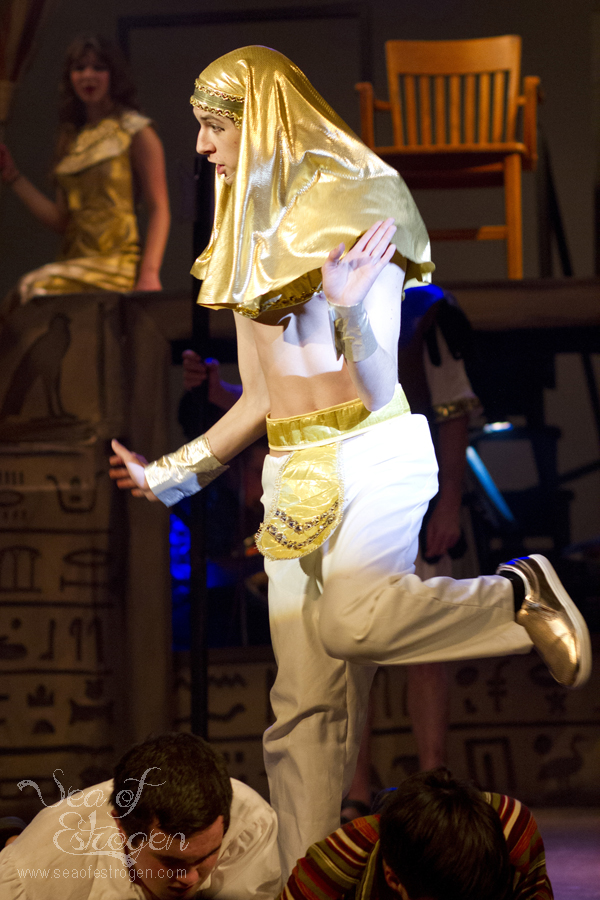 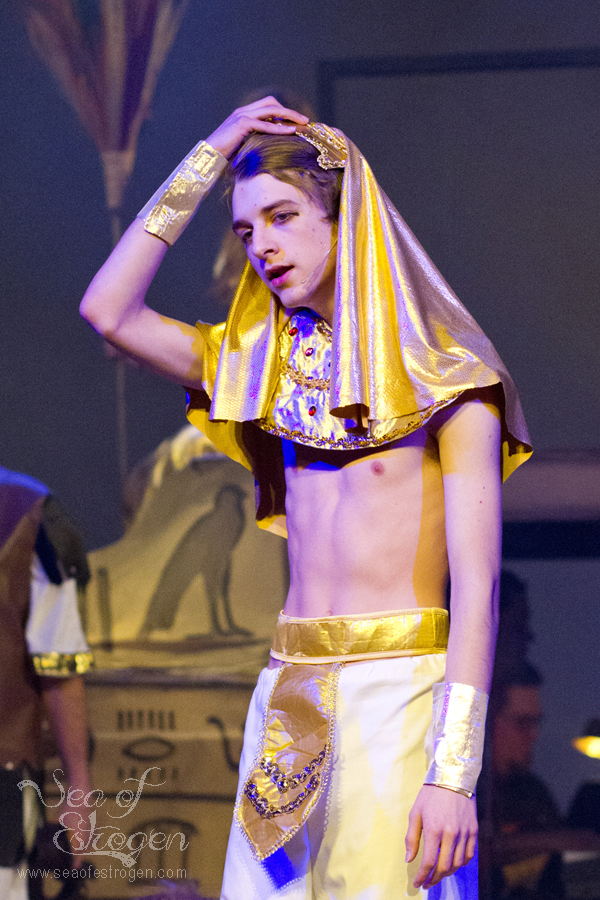 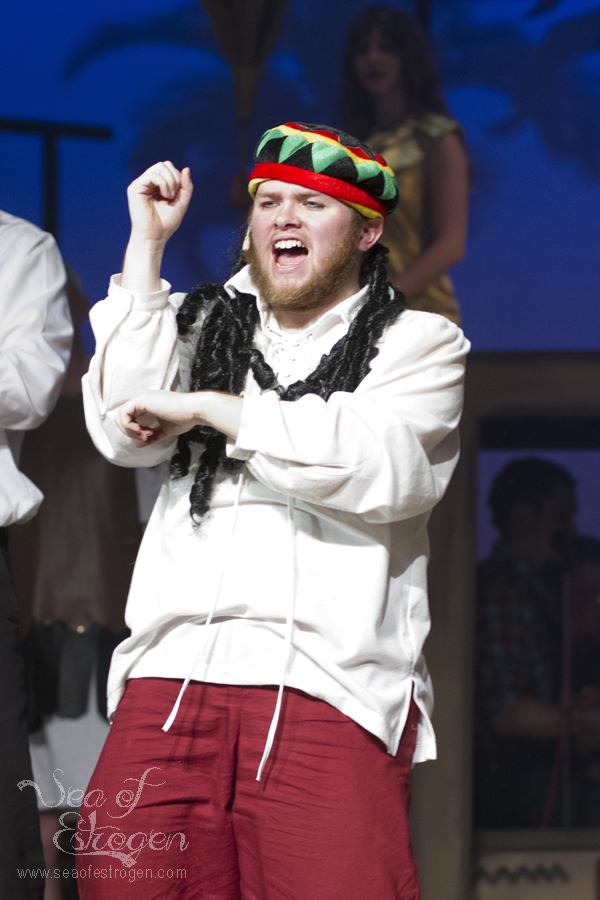 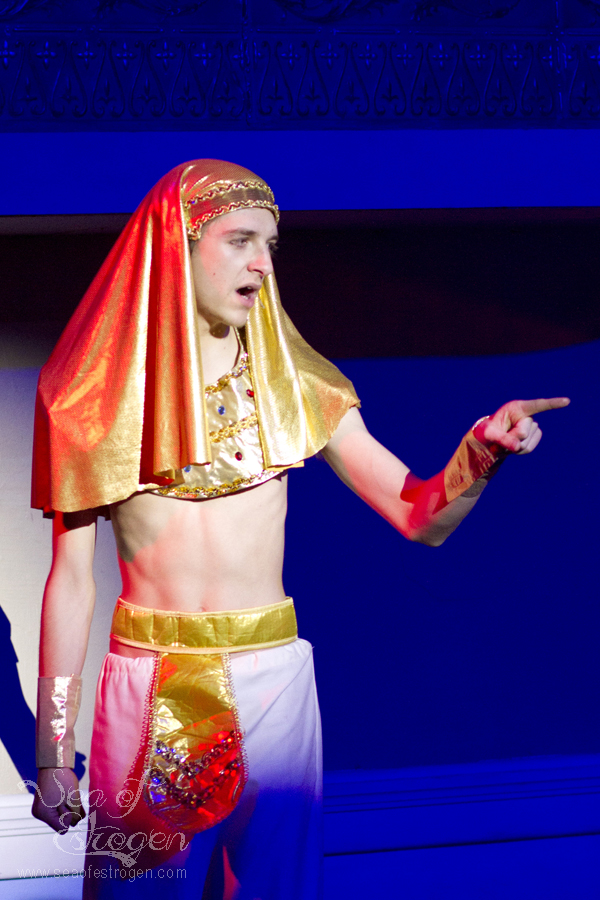 Seeing their selflessness and penitence, Joseph reveals himself and sends for his father. Joseph and Jacob reunite for a happy conclusion, and Joseph dons his colored coat once more. 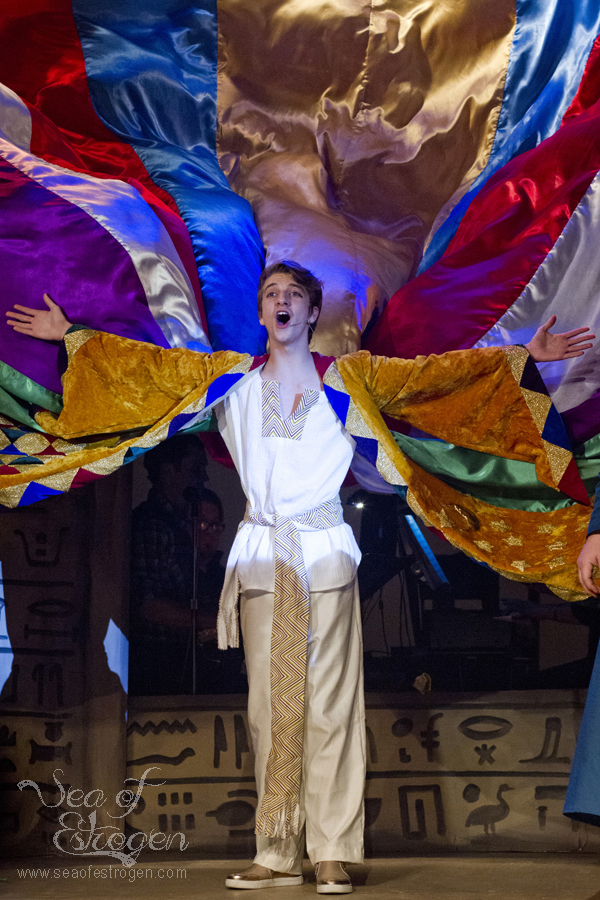 I loved this show – the combination of jazz, rock, 50’s, and country music and dances made this a show to remember!  We love watching you thrive, Reagan! 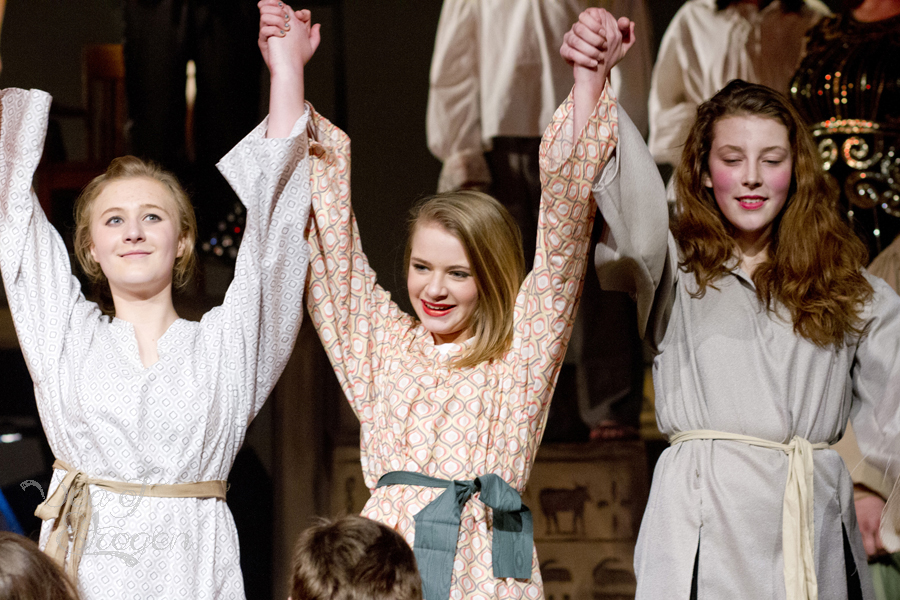