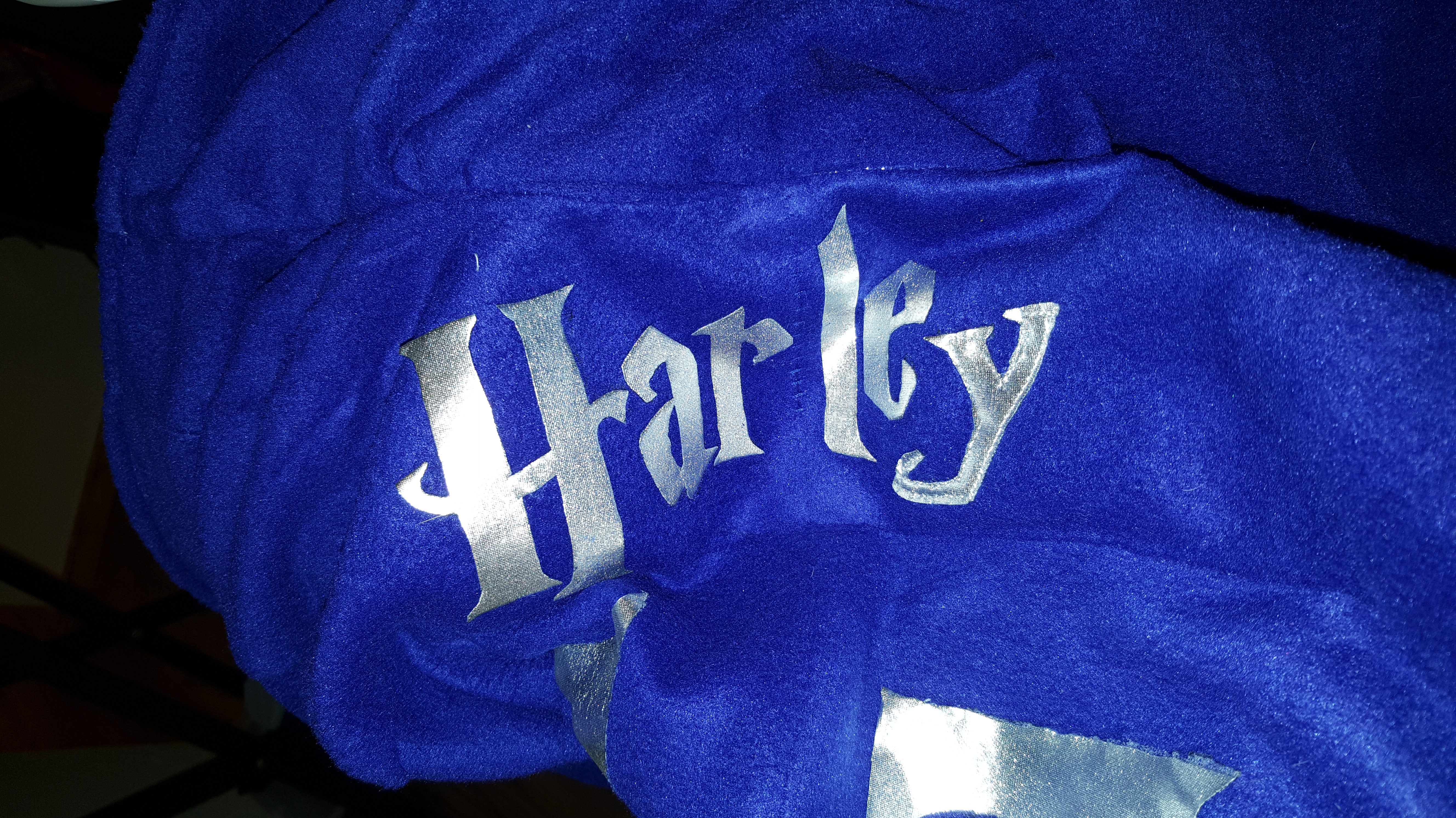 Harley let me know about a week ahead of time that one of the dress-up days for spirit week was Halloween, and she wanted to be a Quidditch player from Ravenclaw House.  She has taken a “sorting” quiz and that is the House she would belong to if she attended Hogwarts and lived in Harry Potter’s world.  She also sent me a pin on Pinterest that detailed how to take a normal cloak pattern and make it into a Harry Potter-esque Quidditch Robe. 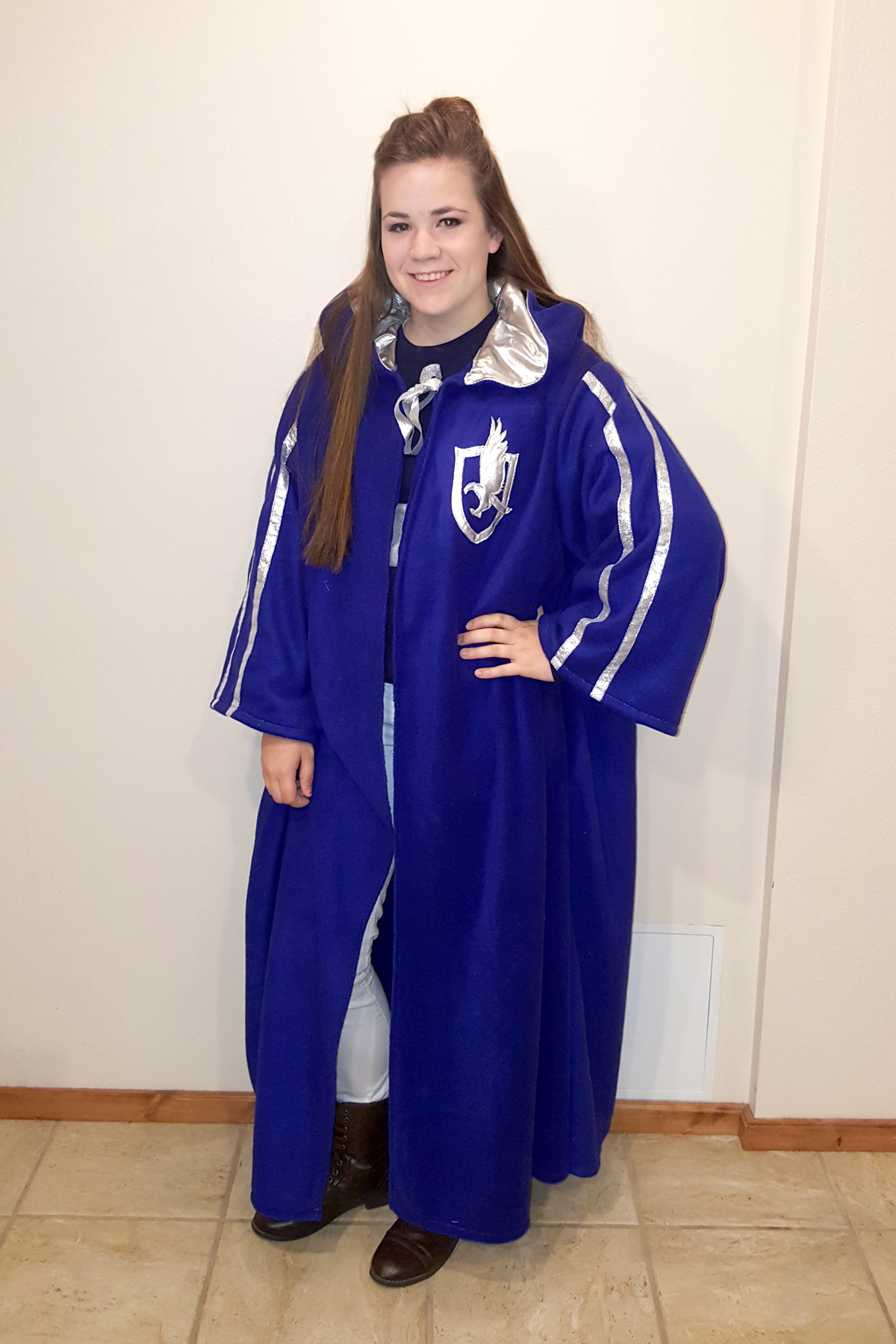 Harley’s robe is made out of fleece, and the body of it was very easy to sew.  I used a robe pattern I already had in my LARP-ing costume stash.  I did not line the body of the robe; however, I did line the hood with silver lamé.  It was not the easiest fabric to sew with, but it worked.

I found silhouettes of the Ravenclaw Crest and Eagle online and traced them onto the same silver fabric I used for the hood.  After fusing them to the robe with fusible webbing (I used Heat’n Bond Non-Woven Light Weight Fusible 20″X25 Yards-White), I sewed around the edges.  What a pain in the butt!  Not because the sewing itself was difficult, but because of the bulk of the robe twisting and turning through my machine.  If I ever make something like this again, I will do the appliqué first, for sure! 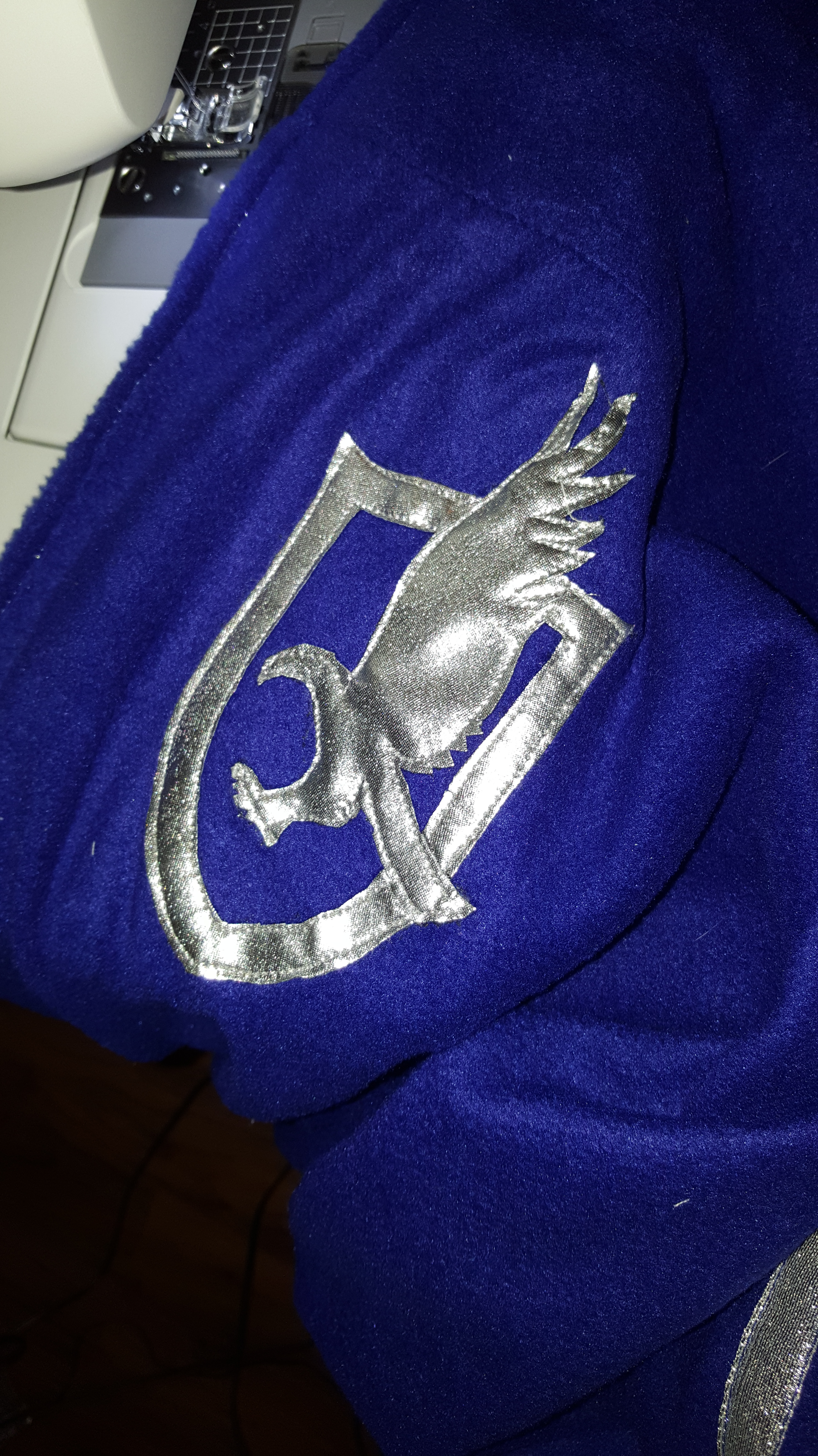 Luckily, somewhere, a fabulous font-lover created a Harry Potter downloadable font, so I was able to make Harley’s name and number without any more trouble than downloading the font and printing it the correct size.  I followed the same process for attaching her name and number as I did for the crest on the front of the robe.  The only issue I had, again, was the bulk of the robe. 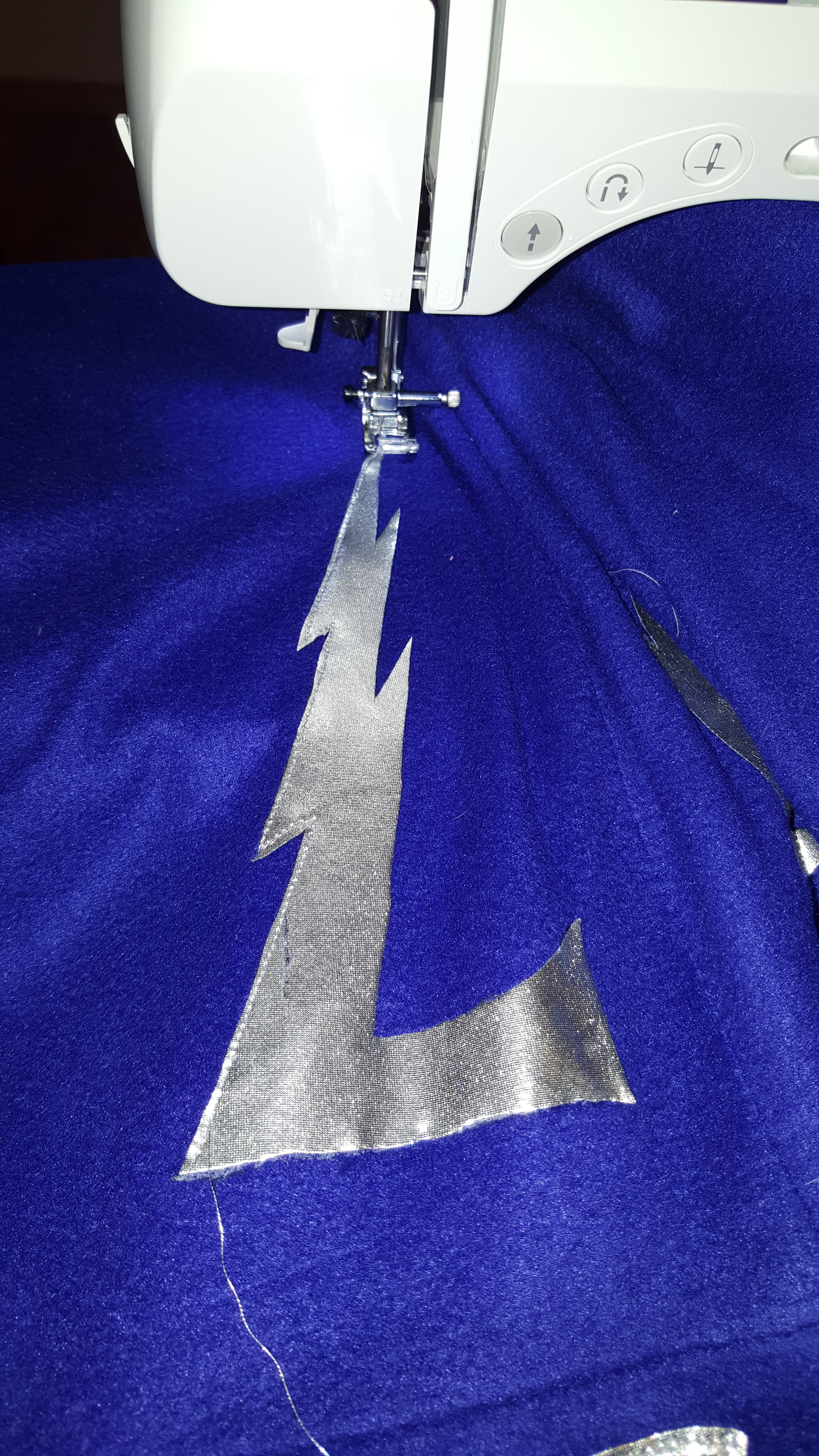 Harley’s name was a little more difficult to appliqué because of all the different direction changes and angles, but I managed to get it done. 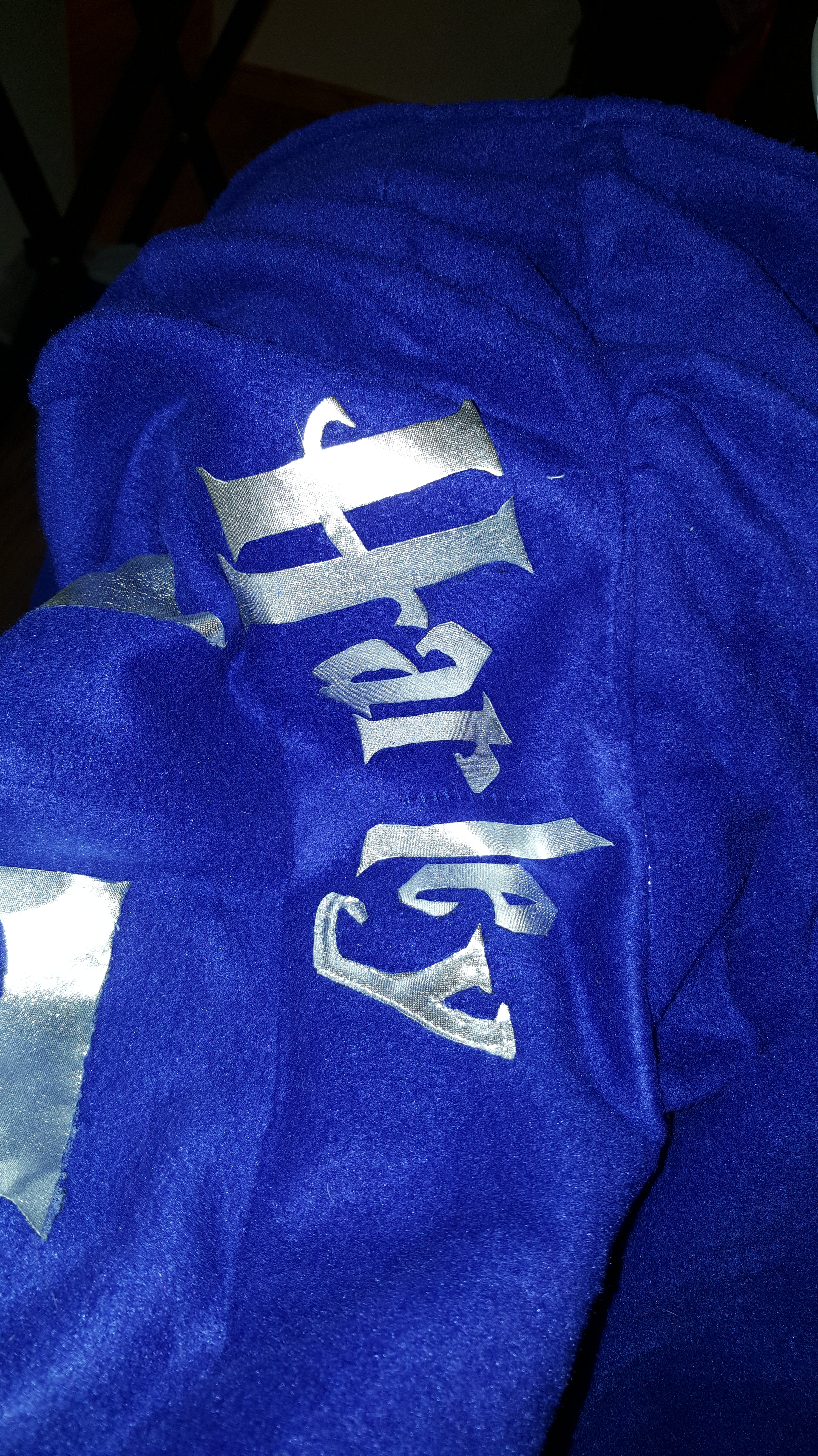 There is nothing arbitrary about the number I chose for her robe.  I couldn’t come up with a good number, so I just used her age. 😉  She is a true Potterhead, and I think she will be the rest of her life! 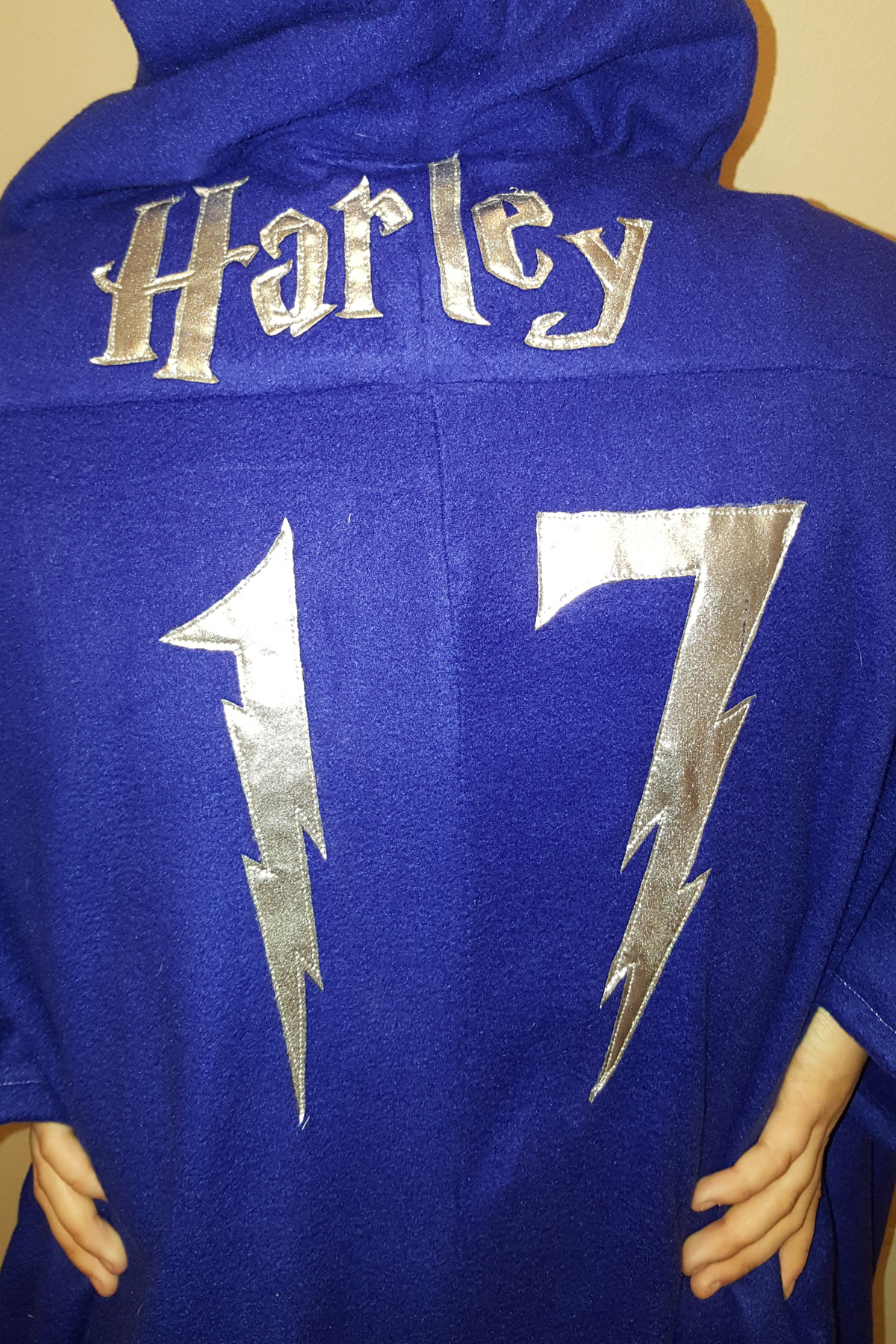 Any of the options we found for purchasing Ravenclaw uniform sweaters were outrageously expensive, so we came up with a super simple solution.  Harley bought two crew-neck sweatshirts – one navy and one gray.  Even though her cloak is more of a royal blue, I think the navy works well.   I dissected a 6″ section out of the middle of both sweatshirts, and sewed the gray band into the navy sweatshirt.  If I would have had more time, I would have done the sleeves, as well, but we were working last minute by this time.  I used the same pattern and technique for attaching the eagle and crest to the front of her sweatshirt. 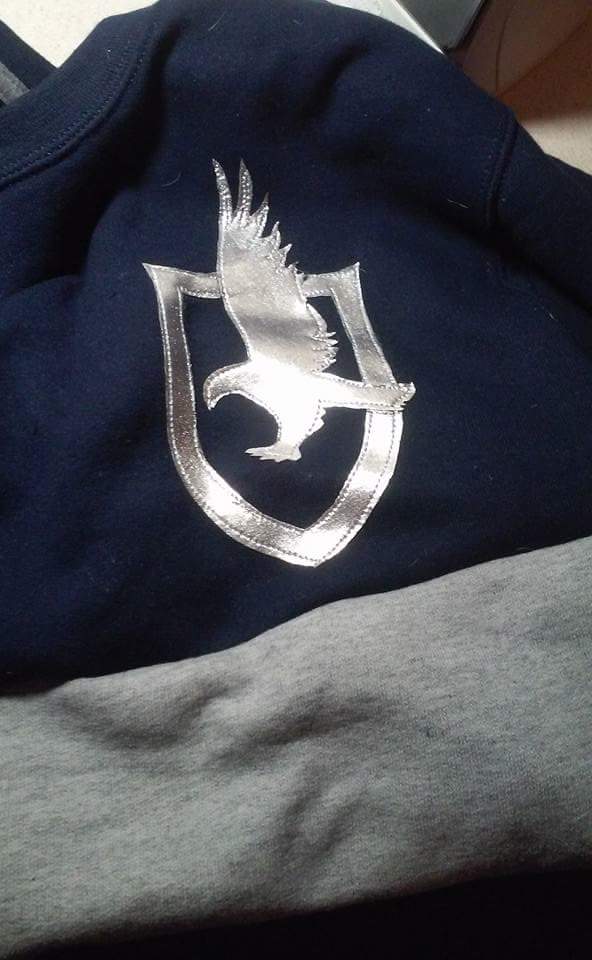 As I was assembling the robe, before I attached the sleeves, I sewed two strips of silver ribbon to each sleeve for that element.  Harley already had the white jeans and brown boots. 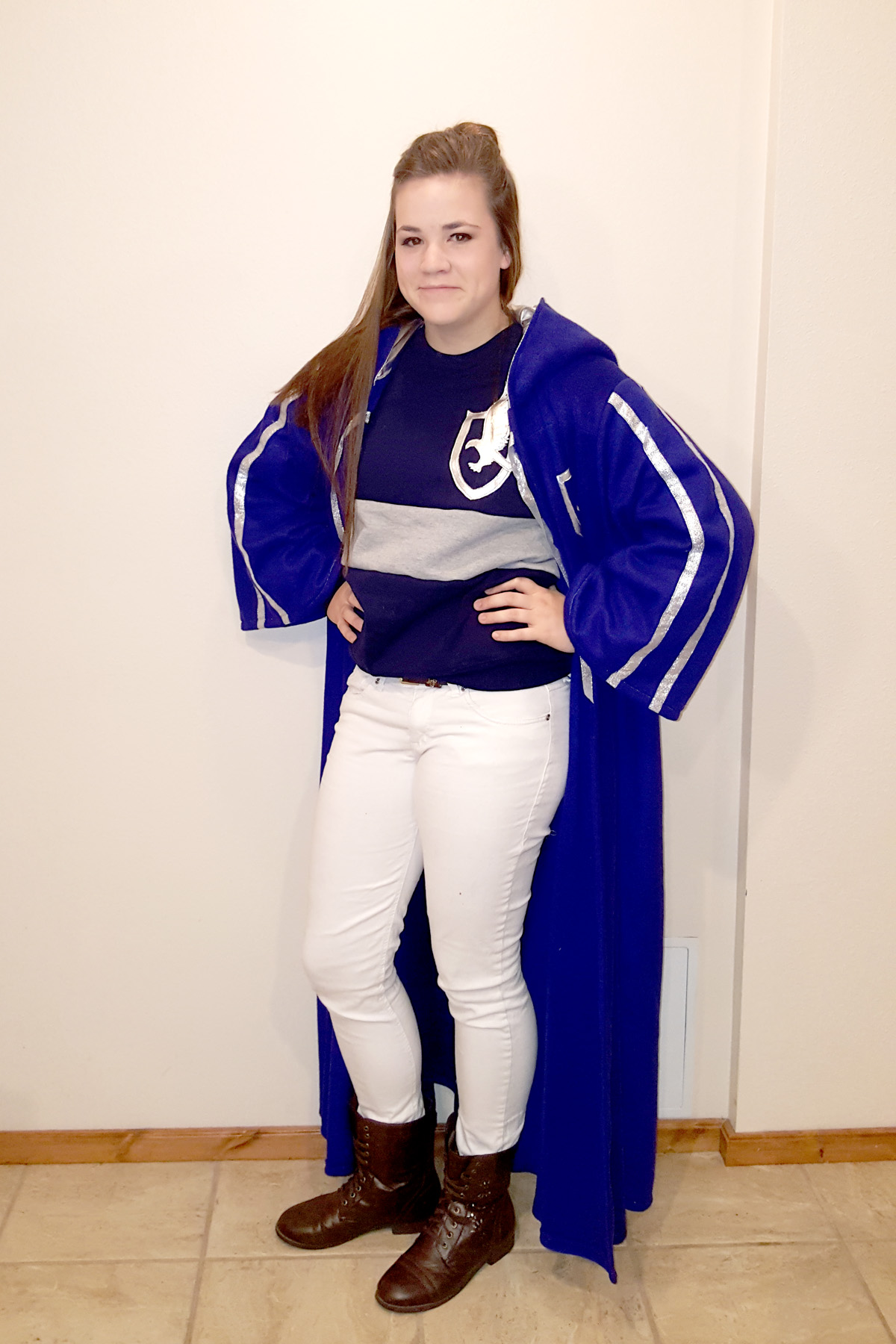 Finished from the back: 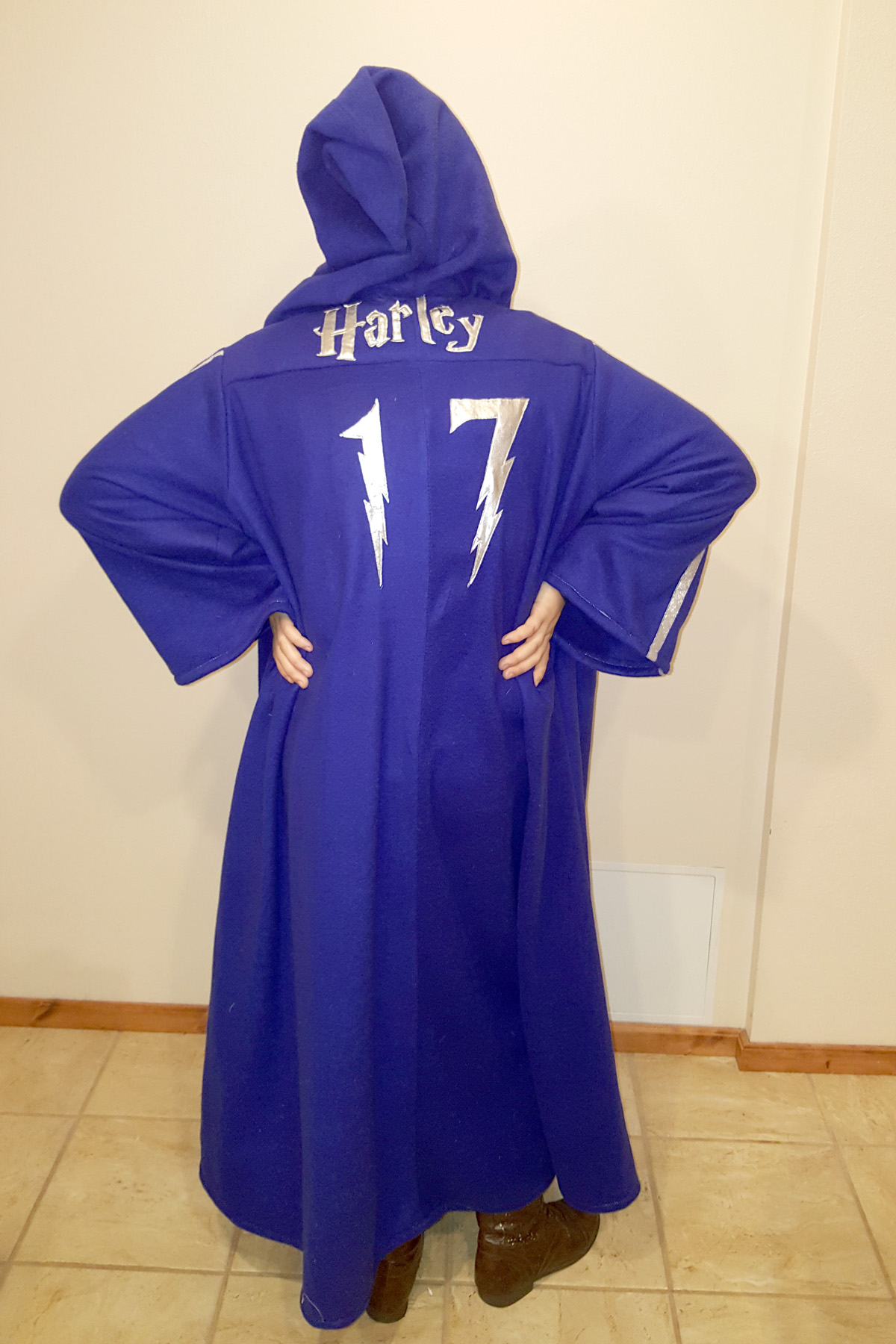 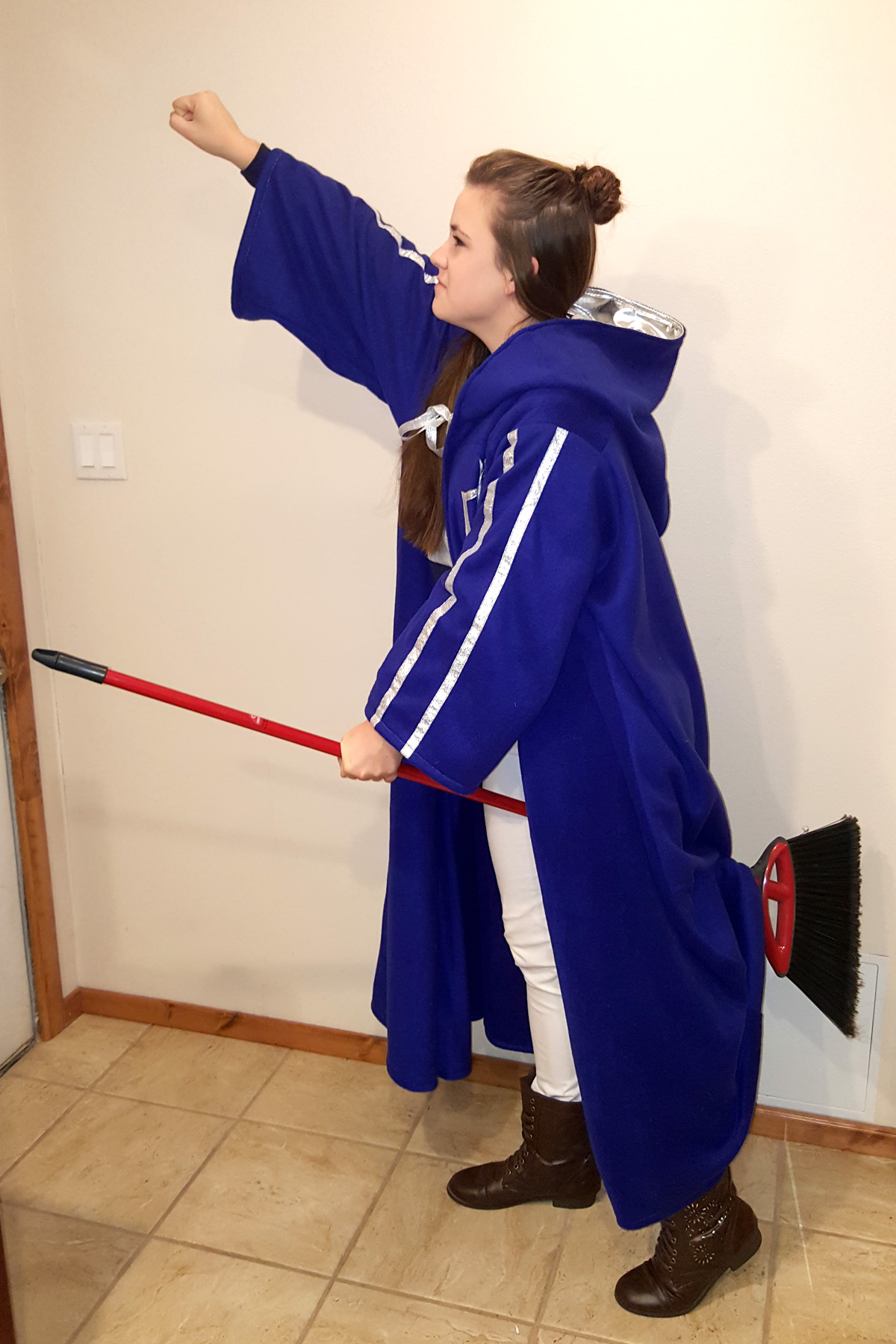 You can’t be a world-class quidditch player without attitude, and she has plenty of that! 😀 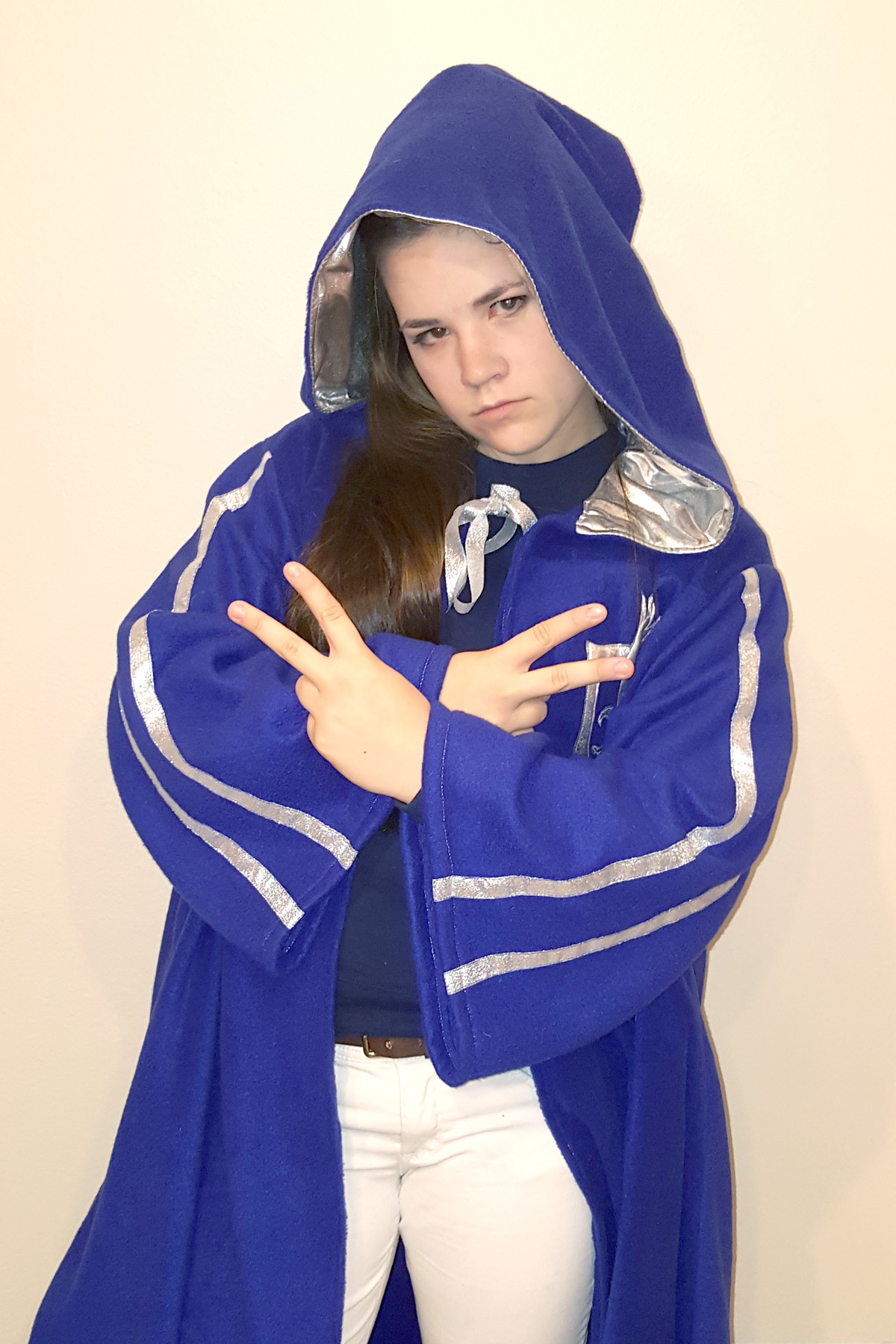 For a somewhat last minute throw together, I think Harley’s costume turned out pretty awesome.  I may even have to borrow it from her at some point . . . (if she’ll let me).