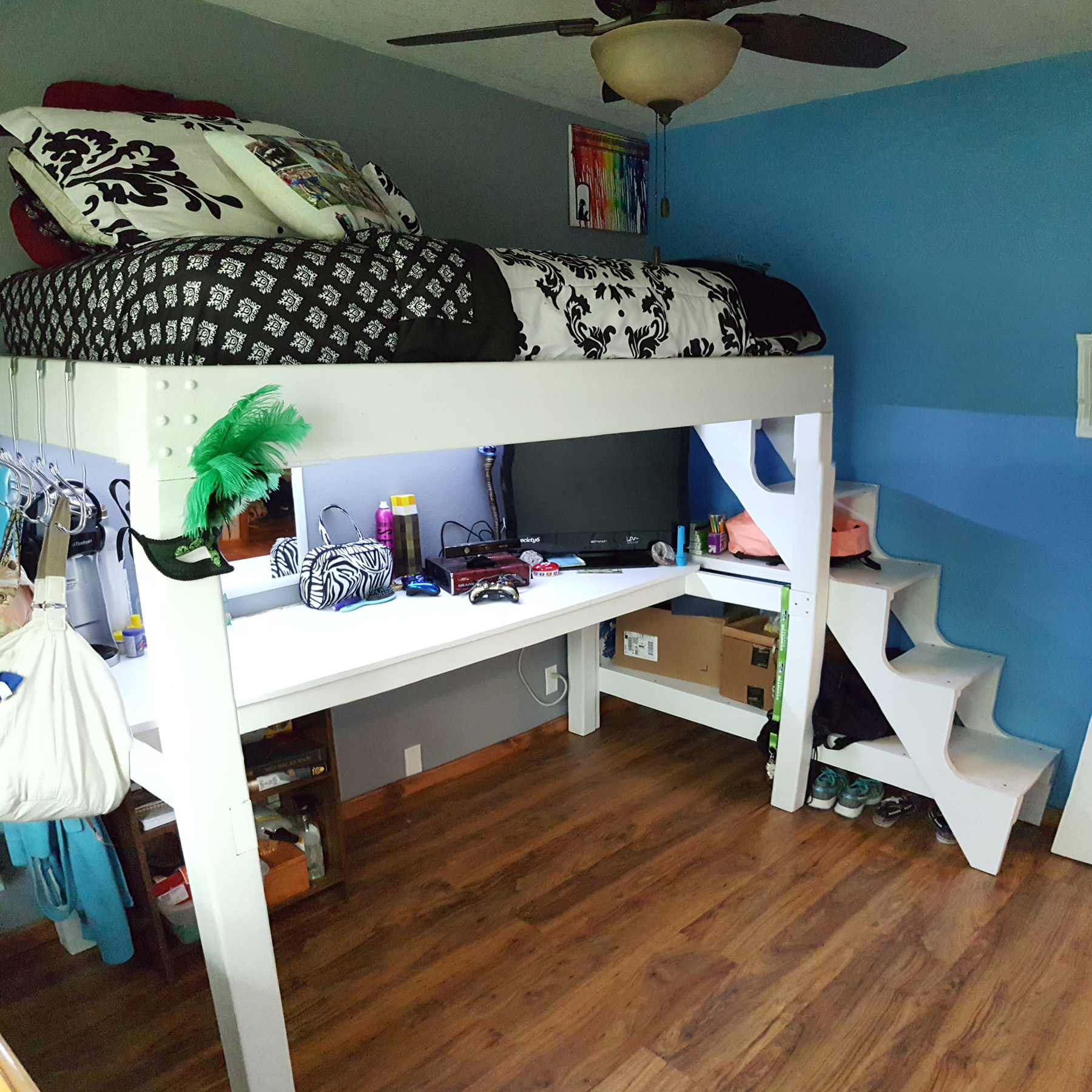 Finishing Reagan’s room has taken longer than either of the other two kids because my dad was custom making her bed.  Just as with Harley’s and Terrance’s rooms, the changes in Reagan’s room were purely cosmetic.  After gutting her room down to bare sheetrock and subfloor, we built it back up to it’s current state, which, is amazing!

Reagan played a big part in the work on her room.  She did the majority of the demolition, most of the painting, and she has arranged it to her liking. She really worked hard to make it “hers”.

After the demolition, Reagan painted her room gray with a blue accent wall.  She also painted the inside of her closet blue.  These pictures don’t really do it justice, but the colors are really nice and go well together.

Todd installed the new laminate floor after all the painting was done and the new light/fan was installed.  It looks amazing with her paint!

Todd’s dad, Glenn, installed all the doors in the house, including the new bifold doors for the closets.

Reagan’s room is, by far, the smallest in the house, and it didn’t include a lot of room for her gaming system or a desk to do homework on.  She came up with a perfect solution – a loft bed, and she asked my dad to build it for her.  He had some other projects he had to work on first (mainly the vanity for the master bathroom), so she originally used one of Terrance’s old beds until Dad could build her loft bed.

Dad got her bed built, and we put it in her room, but it was too tall and the ceiling fan blades were perilously close to the mattress.  After taking it home and dropping the height of the mattress by about 15″, Reagan was finally able to completely move in and unpack.

I think my absolute favorite part of her new bed is the desk/work surface/gaming table underneath.  I had some extra strips of LED lights from the installation in the Pantry, and Reagan installed them on the underside of the bed so she has some great task lighting!

Another fun, quirky little addition that she added is the bat hanging from the “rafters” of her bed – you can see it in the upper left part of the picture above.  For as long as I can remember, Reagan has LOVED that my dad studied bats, and she has had this specific stuffed bat since she was a baby.  When we lived in Irrigon, she shared bunk beds with her oldest sister, Emma, and she hung this same bat from the mattress supports of Emma’s bunk when she was just three years old.

The final result!  Reagan’s room is done, and it is completely “her”.  It is a room that can maintain its personality easily or be changed up as she grows.

I am excited to see how she further personalizes her room and makes it more her own.