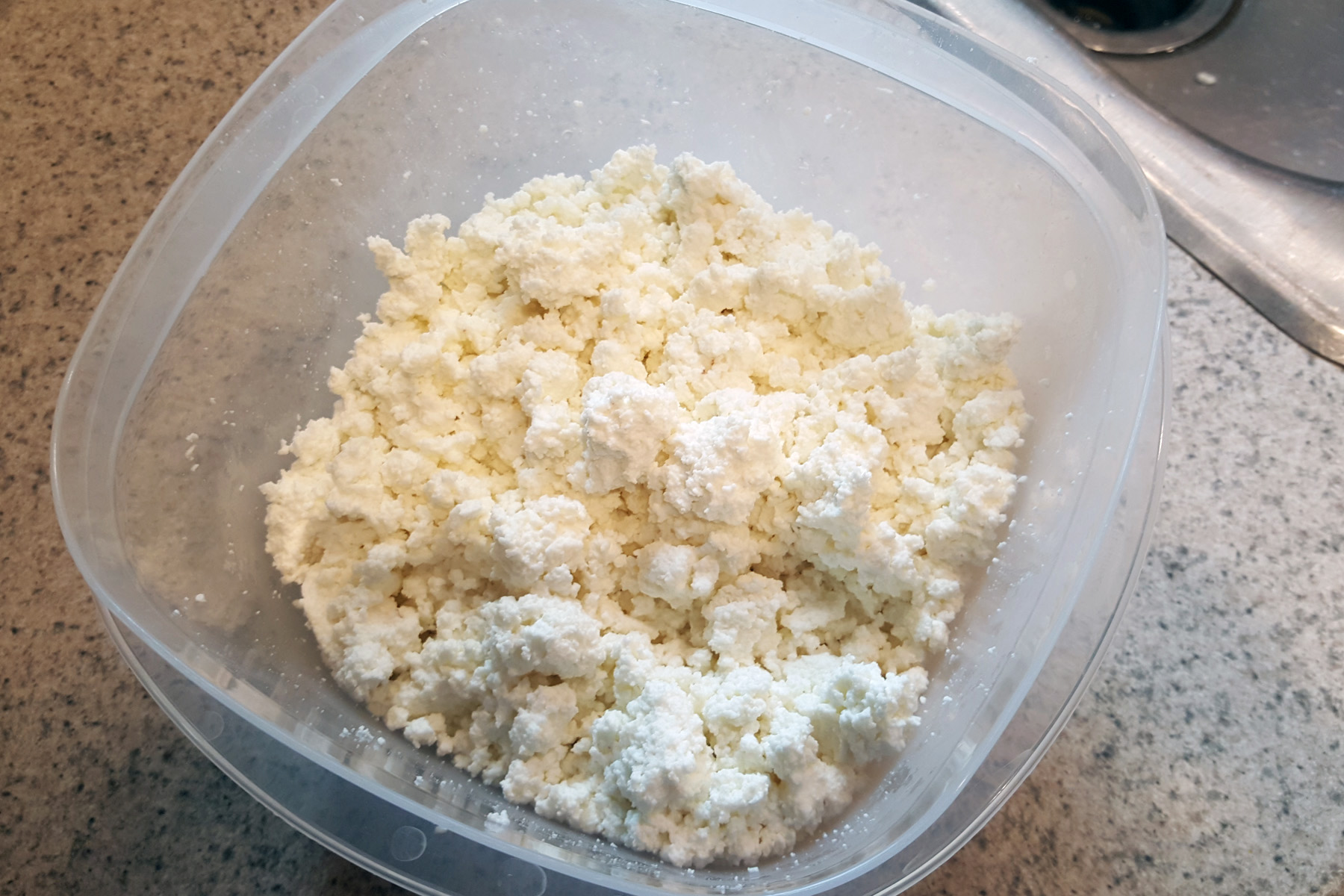 Last weekend, my oldest daughter, Emma, and I went to see the Broadway Across America production of Wicked!.  Part of our trip included picking up my nephew Benjamin and delivered him to my sister’s house.  We also delivered some things to her that had been shipped to her other house by accident.  In addition to going to the wrong address, she received a duplicate order of a cheesemaking kit, so she gave the extra kit to me.  It is the Ricki’s Cheesemaking Kit for 30-minute Mozzarella and Ricotta.  The kit originally came from the New England Cheesemaking Supply Company, but I’m pretty sure Erika purchased it on Amazon.

At any rate, she gave me a kit, I put on my big-girl panties and a brave face, and I made cheese!

I only say that about the big-girl panties and brave face because my kitchen “experiments” usually end in disaster and inedible lumps of toxic waste.  My sister, on the other hand, is a kitchen genius.  She said making these cheeses was easy, but I didn’t believe her.

Lo and behold, it actually was easy, fast, and successful!

When I am making a recipe that I am familiar with, or have used before, I tend to get my ingredients out as I need them.  In the case of making cheese, though, I was incredibly nervous (have I mentioned I hate failing?), so I had all my supplies and ingredients out and ready to use before I started.  I think that was a huge part of the success – even if only mentally.

The great part about making either of these cheeses is that they use regular old, off the grocery store shelf whole milk.  The only requirement is that it cannot be ultra-pasteurized, and the fresher the better.  I’m assuming whole milk straight from the cow would make amazing cheese . . . maybe someday.

After dissolving Citric Acid in water, to create a solution, I combined it with a gallon of milk in a large stainless pan, and I also added cheese salt (my ricotta is pretty bland, so next time I will probably add more than the recipe called for).

Heating the milk slowly (low or medium heat) and stirring well helps prevent scorching.  Once the milk starts warming, flakes and curds start forming.  I knew I was doing it right when I first started seeing the small curds!!!

Eventually, when the milk reached a high enough temperature (190˚-195˚), I just needed to let it sit for about 10 minutes to allow the curd to finish separating from the whey.  The whey is the yellowish colored liquid below.

I had a stainless steel colander lined with butter muslin and cheesecloth ready, and after the curds and whey and finished separating, I gently ladled the curds into it for draining.

The recipe said to “hang” the draining curds, but I didn’t really have anything to hang the full cheesecloth from, so I improvised.  A thumbtack in the soffit above our kitchen sink combined with paracord worked well.  I just tied one end around the muslin/cheesecloth and let it hang for about half an hour.  The longer you hang it, the drier the cheese ends up being.  Since I intend to use this cheese immediately in the lasagna I am making for dinner one night this week, I didn’t let it hang for an extended period of time.

Look at all that yummy, crumbly ricotta!

The process for making mozzarella is a little more difficult, but it is still easy and was done within an hour.  The hardest part of making mozzarella, for me, was waiting for the rennet to work and the curd to form to look like a custard on top of the whey.  I was so nervous about making the mozzarella that I didn’t take nearly as many pictures of the process as I did of the ricotta, and I’m kind of bummed about that.

The beginning of the process is similar to the ricotta process – mixing citric acid diluted in one cup of water (use distilled water, not chlorinated tap water) and heating.  This time, however, the temperature doesn’t need to be nearly as high – only 90˚ instead of 190˚.

Once the milk mixture reached temperature, I took it off the heat and added the rennet – this part was weird simply because the instructions indicated to use a top to bottom stirring motion, which felt awkward.

After the rennet was stirred in, I covered the pot and let it sit.  I waited.

And waited for the whole five minutes 😉 .  (I’m not known for my patience).

After waiting an eternity, I checked the curd and whey – the curd had not formed in a solid custard like layer, so I let it sit for a few more minutes.

After the curd custard formed, I cut it into 1″ blocks, slicing clear to the bottom of the pan so I ensured a complete cut.  After cutting, it was time to heat it back up again, this time to 110˚, stirring slowly the whole time.  After the curd reached temperature, I took it off the heat and continued stirring for 4 minutes (2-5 minutes was recommended, but longer for a firmer cheese).

After firming up a bit, I drained the curd in the colander.  While I was patiently (ah-em) waiting for the rennet to work, I filled a large pot with water and started it heating to 185˚.

The next part is the trickiest, and it is the part I was most nervous about.  I dipped the colander with the curd into the pot of hot water, pulled it out, and worked it with my spoon.  I repeated this step several times until the cheese was well mixed and super stretchy.

Once the curd reached the proper stretchy consistency, I took it out of the bowl and kneaded it much as you would bread dough.  It was difficult because the cheese was almost too hot to touch at that point.  I kneaded the cheese until it was smooth and shiny, and added additional salt to taste as I went.  After kneading long enough, the cheese is soft and pliable enough to stretch like taffy.

I kneaded it back into a nice ball that I then formed into a log.

To help the cooling process, the log was first placed in 50˚ water for 5 minutes.

The final part of the cooling process is a 15 minute ice water bath.

After the mozzarella log cooled completely, I wrapped it in plastic wrap and threw it in the fridge with it’s brother, Ricotta.

I made lasagna using both of these cheeses, and it was amazing!