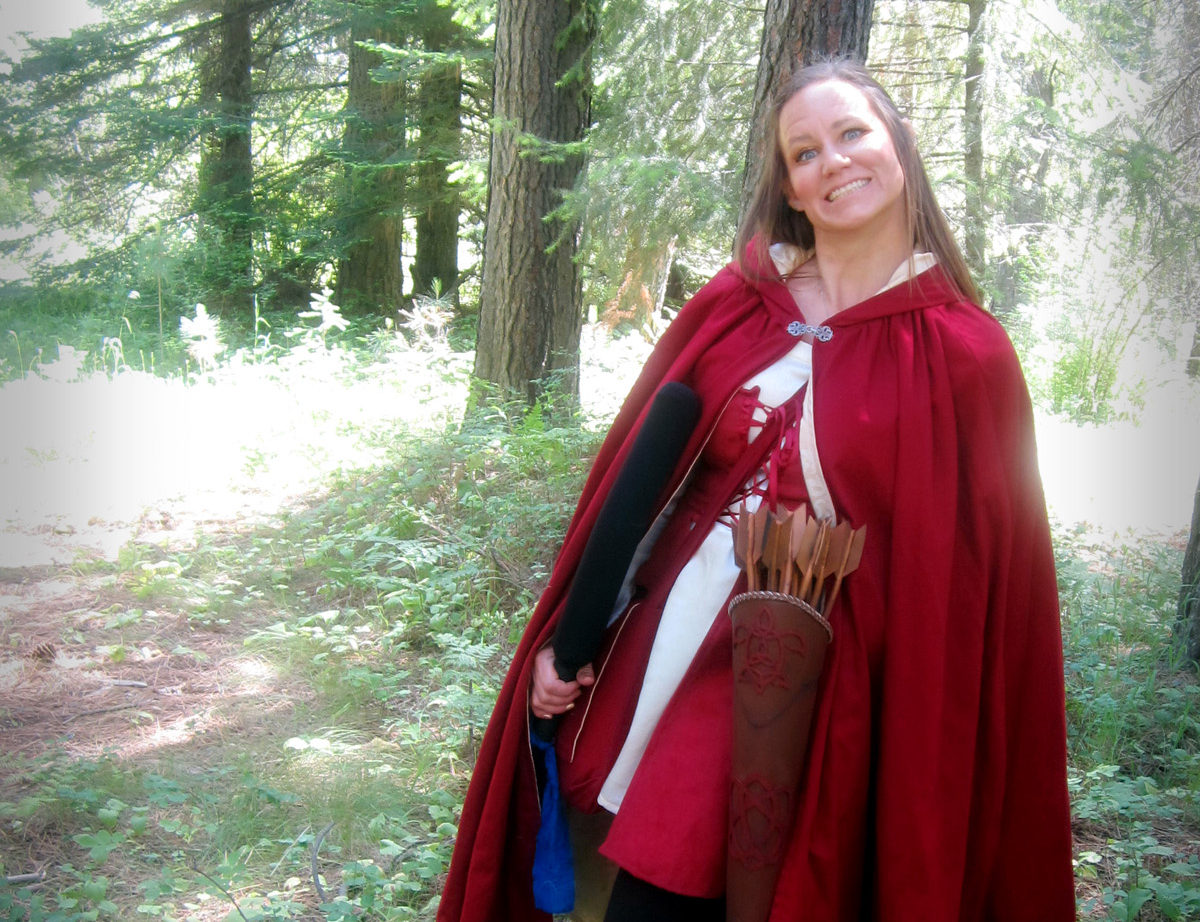 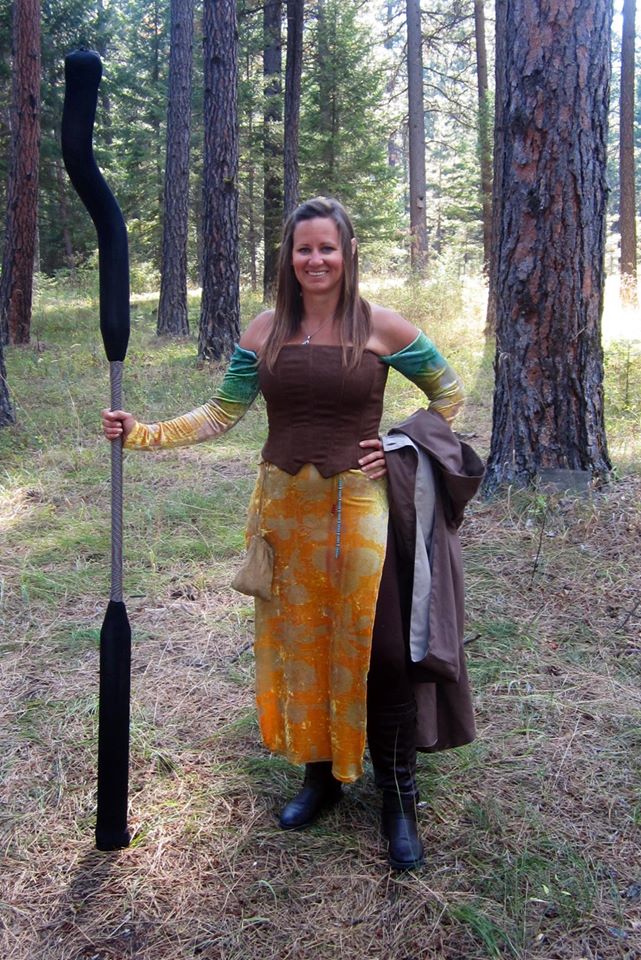 When Todd first asked me to give LARP-ing, he asked me to just give it a try,  and if I didn’t like it he would never ask me to go again.  Well, it turns out I really liked it, and I have continued to be part of Sojourn.  When I first started going, however, I really did not know what to do as far as a costume – Tessa is a wood elf, and I had no idea how to put something together that worked.

What I came up with was the outfit on the left above.  Essentially it was a stretchy dress that I repurposed, cut up the sides, and cut off the turtleneck top to have an open neckline.  I wore leggings under it, and I made the corset top to wear over it.  I also had a hooded jacket (draped over my arm), as well.  It worked.

Three events and several wardrobe malfunctions later, and I tossed that sucker in the trash.

I am not sure how old the dress was before I bought it secondhand, but it eventually started to lose its stretch.  I did not sew the corset correctly, and the boning started coming out.  The combination of the dress losing its stretch and being big busted lent itself to some funny, awkward, and annoying wardrobe malfunctions, especially when trying to run through the woods (or anywhere for that matter).  When I said I tossed it in the trash, I wasn’t kidding.  At the end of event weekends, we take the time to help the GMs clean up, and when I changed into my “normal” clothing, I literally threw the dress and corset into the garbage can.

I spent the better part of the next six months thinking about how I could make a new costume that would be comfortable, allow me to move the way I needed to, be “elf appropriate”, and prevent any embarrassing wardrobe malfunctions.  I finally came up with a plan around January, and when Todd and I were in Boise one day, we bought all the fabric I needed, as well as stuff he needed for his costume upgrades.

This is the final result.  The basics are the same as before – leggings with an over dress and boots; however, this costume is much better made!  I bought a super cheap pair of leggings from Wal-Mart thinking I would replace them when I had money, but they ended up being the best leggings I’ve ever owned.  They don’t fall down, and they’re thin, so I don’t get too hot.

I made the cloak first because it used the prettiest fabric as a liner, and I couldn’t wait to see what it looked like!

I made the dress next, and it was surprisingly easy!  I didn’t look at the pattern very well, though, and the sleeves called for a row of super tiny buttons at the wrist to close them.  Um, no.  I hate hand-sewing, and buttons are a close second!  For the June camp, I left the sleeves open, but it was quickly obvious I would need to find a way to close them because they kept getting in my way or twisting around my arm (you can see them hanging open in the picture above).  I won’t be using the tiny row of buttons, but I think I can open up the seams enough to put one loop and button right at the wrist to close it.

The other problem with the dress is pretty minor.  I did not alter the pattern at all, and I made it based on my largest measurement (uh, big boobs suck some times), so the upper sleeves do tend to fall off my shoulders which is pretty annoying.  I have never altered a pattern, and I am not sure how to alter this one to alleviate this problem.  Since I do plan on eventually having several items of each piece, I will be able to practice altering to get it right.  I also plan on making at least one with shorter sleeves – elbow length, maybe – because it is SO hot in long sleeves in the summer in Eastern Oregon!

The overdress is amazing!  While lacing up the front is kind of a pain every time I want to put it on, it fits great, and I love that it doesn’t close all the way, giving me room to move.  It has enough boning in the bodice to give it shape, but it is flexible enough to still be comfortable.  There is one problem with it, as well, and I didn’t realize it until I was at camp with my costume on.  Once again, I did not account for altering, and I also did not try on the overdress when I sewed the straps in place, so they are a little long.  They were constantly falling off my shoulders during the event, but it is a very easy fix and it doesn’t change how much I love the overdress.

I don’t have a very good picture of it, but the overdress is split up the sides of the skirt about twelve inches – it is visible near my left hand in this image.  I really like that it helps show off the dress underneath, but also that it allows for more freedom of movement.

I also made that simple shoulder/messenger bag to carry my “arrows” and other belongings during the game, and it worked really well.  It is deep enough that stuff doesn’t fall out, and the flap can be left open for easy access.  I used the same fabric for it that I used to make the cloak.

When Todd and I bought all that fabric, we also bought brown fabric exactly the same as the red to make another overdress, and I have several fabrics to make more dresses, as well.  Since  we were in the middle of remodeling our house when I was sewing, I didn’t have time to make more than the one version.  I expect that by our next event in August I will have at least one more costume put together, and I can’t wait!