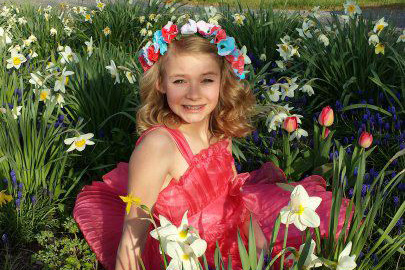 Cove School has a tradition, but I have no idea how long it has been happening.  Every year they hold a May Day musical program that includes a May Day Court (the first graders and seniors) and the winding of the Maypole (performed by the fifth grade class).

I first became aware of the May Day program as a Senior at Cove School, when I transferred there from La Grande, but I didn’t really take the time to learn about the tradition at the school or the history of the Maypole.

Thursday night was the annual May Day program, and Reagan has been talking about nothing else for weeks.  We heard repeated chronology of how the program would go and who was doing what job, clear down to what colors they were supposed to wear and who they each were partnered up with.  To say she was excited would be a complete (and stupid) understatement.

Because of Reagan’s excitement and my general lack of knowledge about it, I did a little research to find out more about the history of May Day and the Maypole.  There is no concrete “start” to the tradition, but it has been traced back to Germanic pagan traditions, and during Medieval times was wide-spread throughout Germanic Europe.  It is also believed that the original festivals were in honor of the Germanic pagan reverence for sacred trees.  As with most rituals and traditions, the celebration has evolved and changed over time and by region.  At times the celebration was about fertility and new life, and the beginning of Summer.

The celebration of May Day has deep historic roots, as well.  It is related to the Celtic festival of Beltane and the Germanic festival of Walpurgis Night.  It falls half a year from November 1st, another significant dates in paganism.  May Day has also gone through several changes, but still holds long-honored traditions.  One of those traditions that lives on today is the leaving of May Baskets.  Baskets filled with flowers and/or treats are left on a doorstep, and then, as Reagan put it, “you ding, dong, ditch and run away”.  In early times, the person receiving the basket tried to catch the giver, and if caught, a kiss was exchanged.

More than anything, the practice of May Day and winding the Maypole is a celebration of happiness, renewal, and children.  I love that their is such an “innocent” and loving tradition that is still promoted and taught to our kids.  It has become a rite of passage for the kids at Cove.  The first graders help escort the May Day Court, which is the Senior Class.  All the school’s musical groups perform.  Finally, the fifth grade is the last item on the agenda, and all the hard work and dedication they have shown pays off as they make their entrance and perform first the single strand winding of the Maypole, and then the double strand.

Here’s the LINK if the video doesn’t come through.

I can’t wait until next year, when I will get to watch an entirely new group of kids enjoy their very important roles in this amazing tradition.