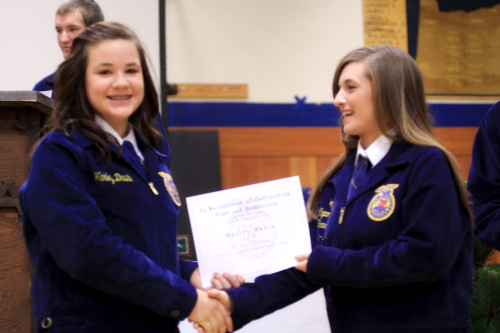 The annual Cove School FFA Banquet was held last Friday night.  The FFA kids spent a lot of time soliciting donations, planning the meal, and organizing the evening.  It was not the first FFA Banquet I have attended, but it is the first one that directly involved one of my kids.  The banquet is free, and is open to the community.

Cove is the first school I have been involved with that has a very active, full-time junior high FFA/Agriculture program.  When we were in Irrigon, the Junior High kids took Ag classes, but they only took one quarter each year.  In Cove, the Junior High FFA program is year-round, and it is held before school, at 7am, and several times they have also met during their lunch hour.  Students active in Junior High FFA are in the Discovery Program.

This year at the banquet, the Discovery kids were in charge of reciting the FFA Creed.  Five students were selected to participate, and Harley was one of them.  I am so proud of the poise and grace she showed during her portion of the creed (the first paragraph).  It was surreal watching her up there, picturing the tiny little brown-eyed girl who is full of giggles and laughter – but instead seeing a beautiful, poised young lady speaking clearly, engaging the audience, and enjoying herself despite being very nervous before hand.

I believe in the future of agriculture, with a faith born not of words but of deeds – achievements won by the present and past generations of agriculturists; in the promise of better days through better ways, even as the better things we now enjoy have come to us from the struggles of former years.

This was definitely not the same little girl who started the school year.

Harley and all the Discovery kids did a fantastic job reciting the FFA Creed, and I am very proud of all of them!

The one thing we were not aware of was that the FFA Chapter decided to award Discovery Pins this year, so Harley received her very first FFA pin, and she was completely giddy over it!

Finally, the FFA Chapter Members were recognized, there were 8 Discovery kids overall.

I am so proud of the young lady you are becoming, Harley Raye, and I know there are only great thing in the future for you and FFA.