Well, archery season officially opened Saturday morning. Aaron, the girls, and I all headed to the mountains in search of elk to hunt. We had a great weekend. Neither of us saw any elk, but we had plenty around us, and several others in our hunting party saw several. It was a successful weekend at any rate, at least we know they’re there, now we just have to get closer to them.

The girls had a blast playing with their friends, Kaylee & Madi Ledbetter, and Josh & Bryce Linker. They swam, caught frogs, played hide & go seek, and made forts.

There were about 25 frogs in this thing!

At times, I think Miss Reagan felt a little left out, but she managed. She just got extra snuggling time from all the moms around when she was feeling lonely. It’s just such hard work to keep up with those big girls sometimes. The first night we were there, Reagan had several *meltdowns* because she was so tired, so I made her stay in the trailer to read books and head to bed. She was completely bent out of shape until she beat me THREE TIMES playing Uno! I wasn’t even “playing down” to her, it was pretty cool! She really thought she was neat when I said since she had to stay inside & the other girls were outside, she could fall asleep in Mommy & Aaron’s bed until the girls came in. She loved that.

Now what would a hunting trip be without a flat tire? Apparently, to Jason, it just wouldn’t be a hunting trip. He’s had several flat tires (I think this was his third) over the past couple weeks when he’s gone to the mountains. Of course, we wouldn’t want to let him just forget even having the flat tire, we want to immortalize it by taking a picture!

And aren’t his buddies oh so helpful while he’s working hard changing that flat? 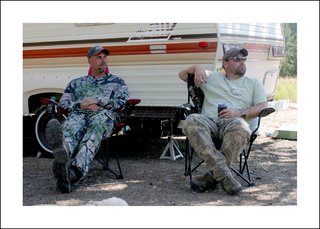 We had a great weekend, and we’re excited to get back up to the mountains next weekend ~ hopefully one of us will manage to get something (there are a total of six of us actually hunting and seventeen total in camp).